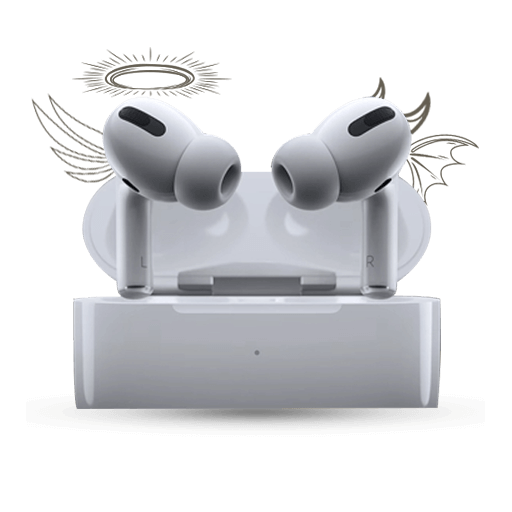 AirPods Pro: Yes, You Want Them. No, You Don’t Need Them

Unless you live under a rock, you’ve probably heard of the release of Apple’s new AirPods Pro—either because you’ve been enthusiastically following the rumours or because you chanced upon a bazillion memes on their somewhat unfortunate design.

Now that they’ve launched, you’ll see a lot of Apple enthusiasts clamouring to get their hands on the newer and shinier version of the AirPods, because … well, why not! Isn’t that what always happens whenever there’s a new product launch? Hot take: I’m really not buying into all this hype.

Why the AirPods Pro Are Desirable

Let’s talk about why the AirPods Pro are so damn tempting. To begin with, they’re a slight improvement over their predecessors. The first and second-generation AirPods, while much-loved and frequently-defended by users of the Apple ecosystem of products, come with a few cons that Apple has taken care of with the new AirPods Pro.

The Active Noise Cancelling (ANC) and Transparency modes in the Pro version (the latter of which allows background noise to reach through your earbuds while the former actively blocks it out) mean that you can choose when you want to ignore the world without destroying your eardrums with blasting music. You can also switch between modes with a squeeze of the stems, which you might like better than tapping the earbuds.

The new design isn’t too bad either, with only a slight chance of ridicule over the hair-dryer lookalike design or whichever cartoon character the viewer might think they look like.

The internet is fast pic.twitter.com/b8gvafgQ5Q

Perhaps one of the biggest “pros” of the AirPods Pro is that they come with in-ear silicone tips (yes, finally) of three different sizes to customize your AirPods’ fit and help them stay in place easier. This, plus the fact that they’re decently sweat-resistant, is making AirPods users consider upgrading from their regular AirPods to the shiny new Pro.

Why It’s Not Worth It

You might have been following the raving reviews on tech websites and decided that you have to have them, even if you already have the previous model. But all these exciting features come at a premium price of ₹24,900 and the guilt of shelling out big bucks on something not wholly worth it.
Why do we at AppleSutra think they’re not all that compared to the second-generation AirPods? Let’s go into it one-by-one.

Both the second-generation AirPods and the AirPods Pro have wireless charging cases. Both have a similar battery life, with 24 hours of listening time with the charging case and about 4.5 hours on one charge (in fact, the previous AirPods offer half an hour more according to Apple). Both feature Apple’s H1 chip, with an always-on Hey Siri.

Then what exactly are we paying for? If you take out the noise-cancelling feature, they’re really not much of an upgrade; and ₹8k extra for one feature and a (thanks to Twitter, frankly hilarious) makeover just doesn’t seem reasonable to us.

Some argue the ANC is just that good, and the sound quality more than makes up for the price. But, let’s be honest here, AirPods aren’t exactly known for their sound quality (no, not even the AirPods Pro!). While the sound quality is a smidge better with noise-cancellation, it’s nothing to boast about and some outside noise does leak in. Moreover, if you use the Transparency mode, you’ll get almost the same sound quality as your old AirPods. I hate to go against our favorite brand here, but if it’s sound quality you’re going for, there are many cheaper and better alternatives, such as the Bose or Sony in-ears.

The AirPods Pro are definitely much better at staying put than the older models, which means no hastily looking around when they fall out in a public place to check who saw your moment of shame. But regular AirPods users wouldn’t have been facing that much of a problem anyway. And if you’re looking for proper gym or running earbuds, then you should probably go in for Apple’s Powerbeats Pro instead, which come at a similar price range as the AirPods Pro and feature ear hooks that ensure they stay in place. (No noise cancellation to be found there, though, because why expect everything in one package, right?)

The only reason you might want to get the AirPods Pro is if you’re looking to get back the exclusivity that came with the AirPods earbuds initially. You’re probably tired of seeing AirPods everywhere and want to bring back the elite feel of owning a premium product. In that case, the AirPods Pro are just for you. Otherwise, well, it’s probably better to be loyal to your old AirPods for now.