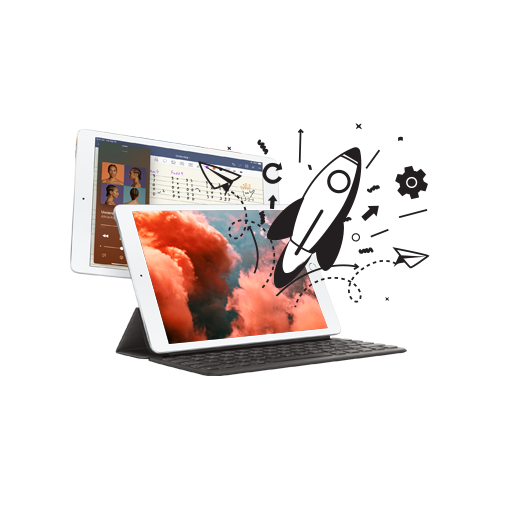 Yesterday’s Apple Time Flies Event saw the launch of the new iPad 8 alongside the iPad Air 4. The 8th gen iPad can be best described as a performance refresh of the 7th gen model with a few tweaks.

Here’s a handy little list of the new iPad 8 features that you can peruse at your leisure:

Just like its predecessor, the new iPad 8 comes with a 10.2-inch display, 500 nits of brightness, fingerprint-resistant oleophobic coating, and Apple Pencil support.

You’ll be happy to know that the iPad 8 features a more powerful processor than in its predecessor, i.e. the Apple A12 Bionic chipset. It offers a 40 per cent improvement in CPU performance and 2x GPU performance compared to the 7th gen iPad’s A10 Fusion processor.

The new iPad will come in two storage options – 32GB and 128GB. Yes, Apple is sill sticking to the miserly 32GB of storage in the base model.

Nothing much has changed in these two departments. The iPad 8 has the same 8MP rear-facing and 1.2MP FaceTime HD front camera as its 7th gen predecessor. Likewise, it also has the same two-speaker setup.

Even in terms of connectivity, the iPad 8 has the same features as the 7th gen model. It has the same lightning port, Bluetooth v4.2, dual-band Wi-Fi ac with MU-MIMO, and a Smart Connector for the Smart Keyboard. Its cellular variant has a gigabit-class LTE, a nano-SIM card slot, and an eSIM option.

Apple promises that the new iPad’s 32.4Wh Li-Po battery will allow 10 hours surfing on Wi-Fi and 9 hours on mobile data. The device will ship with a USB Type-C charger.

As you’ve probably already gathered from this article, the only real improvement in the iPad 8 from the older 7th gen iPad is its new processor. Yes, the device will also feature the new iPadOS 14, which brings a wide range of new features in terms of software; however, everything else remains the same.

What do you think about the new iPad 8? Do you think it’s worth the upgrade from the 7th gen model?