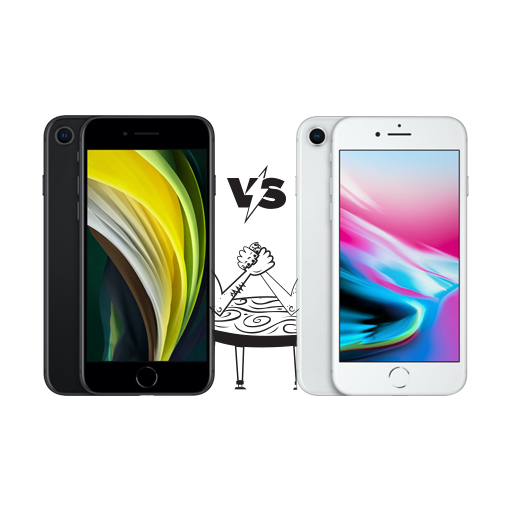 iPhone SE vs iPhone 8: Who’s The Last One Standing?

The iPhone SE is back! It looks very much like the iPhone 8, has some clever new features, and costs about the same as the original from four years ago. (Pretty neat, huh?) So, if you’ve been clinging on to your ages-old iPhone 8, the question now is should you or shouldn’t you upgrade? Will it be worth it? Well, here’s our two-cents on the features of the iPhone SE vs iPhone 8:

If you recall, the original iPhone SE borrowed the design of the iPhone 5. Well, the 2020 iPhone SE looks just like 2017’s iPhone 8 and has the same 4.7-inch retina HD display. This, of course, means that it lacks the slimmer bezel of the newer iPhones. But, if you’re a fan of Touch ID, the good news is that the single fingerprint sensor/Home button lives on in this generation.

The iPhone will come in Black, White and PRODUCT(RED), which is a smaller range of colours than what the iPhone 8 offered.

Don’t Judge This iPhone By Its Cover

Don’t be deceived by the iPhone SE’s older external design though. Its insides have been overhauled to bring the experience up to par with the current crop of iPhones. It comes packed with the A13 Bionic chip that powers the iPhone 11 series, a faster Wi-Fi 6, and Gigabit-class LTE connectivity. You’ll also notice a big difference in areas like AR and gaming.

What About the Camera, You Ask?

The iPhone SE 2020 has one rear shooter, a 12MP wide-camera, with optical image stabilization built-in. Apple is actually using the same camera system as the iPhone 8. But thanks to the more powerful Neural Engine on the A13 Bionic chip, Apple says it’s able to use machine learning to deliver stunning photos, thus calling it “the best single imaging system we’ve put in a phone”.

It includes features like ‘semantic rendering’ found on the iPhone 11, which allows the phone to identify if there’s a person in the shot and makes sure that it preserves skin tones when smart HDR kicks in.

A lot of behind-the-scenes magic has also been applied to the selfie camera. The iPhone SE doesn’t have the TrueDepth camera system housed on the iPhone 11 series. To work around that problem, Apple is using a feature they call ‘monocular depth estimation’, a fancy term for the use of machine learning to enable portrait lighting features with iPhone SE’s single-camera.

Coming To What You’re All Wondering About

And that’s the iPhone SE vs iPhone 8’s price tag, of course.

iPhone SE’s big promise is that users will be getting new-ish hardware at reasonable prices, which is a refreshing change considering how the costs of phones are skyrocketing day-by-day.

And in case you’re wondering, Apple will no longer sell the iPhone 8, which makes the iPhone SE the best value iPhone you can buy today.

If you ask us, the iPhone SE 2020 is worlds better than what Apple originally offered its budget shoppers (Samsung and OnePlus are probably screaming right now). They’ve given us an inexpensive (okay, relatively inexpensive) way to benefit from the advances in tech they’ve made with iPhones over the years. We don’t know how well it will measure up to previous iPhones after its put to use, but the initial specs do look promising for fans of compact, low-cost phones.

We hope we were able to answer some of your questions with this article. Do let us know if you’ve decided to upgrade in the comments below!