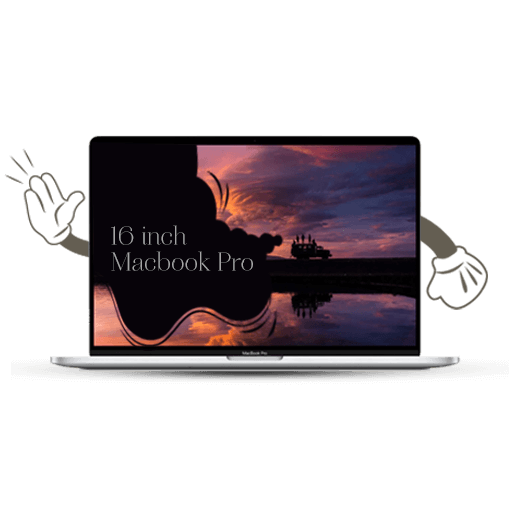 I’m Obsessed with the New 16-Inch MacBook Pro and You’ll be Too!

The all-new 16-inch MacBook Pro is finally available in India for us to spend our hard-earned money on. Naturally, people are clamouring to get their hands on the undeniably pricey, yet unmistakably superior, King of MacBooks. While the defeat of the dreadful butterfly keyboard definitely merits first mention, this new generation of MacBook Pro has a lot more going for it. I didn’t crown it King just because, you know.

Here’s my new MacBook review and why I am heading to the bank to break my fixed deposits.

The Audio’s A Dream

My favourite thing about the 16-inch MacBook Pro is the audio hardware it comes packed with. With this MacBook by your side, is there really any need for external speakers anymore?

Just kidding. I wouldn’t go so far, but the six-speaker sound system definitely stole my heart with how clear the highs and mids were. The new macbook pro sound quality is the best I’ve heard on a laptop. If you’re an audiophile who’s unable to listen to music or work on audio files (geddit?) without a speaker or headphones, this MacBook Pro is here to save you.

Plus, there’s a three-mic array to the left of the MacBook with impeccable audio quality that will have newbie YouTubers, podcasters, or musicians salivating over the studio-quality audio recording they can do without an external microphone. The privileges this generation has! Perhaps if my old laptop’s mic hadn’t been so shitty, my nonexistent YouTube career would’ve been thriving by now.

Of course, you’ll have to be in a quiet environment while recording to make full use of the sound quality of those mics and the MacBook Pro 16 sound quality. lugging around a heavy laptop whenever you need a mic is obviously not the most feasible solution, but, hey, it’s still pretty awesome that the new MacBook Pro has ‘turned up’ its sound quality by a  notch!

Base Model Says ‘No More Settling’

Say goodbye to the 128GB and 256GB variants that seemed to mock us with their lack of adequate storage space. (Yes, I am looking at my 128GB MacBook Air as I type this). Apple’s really upped their game with this high end MacBook Pro. The base model comes with 512GB SSD storage, 16GB RAM, a 100Whr battery with a 96W USB-C charger, a 6-core Intel Core i7 processor, an AMD Radeon Pro 5300M graphics card with 4GB VRAM, and so much more. At a starting price of ₹1,99,900, this feels like a pretty sweet deal, especially when you compare it to the configuration of the 15-inch MacBook Pro that this model is replacing.

The Break-Up That Finally Happened

Yes! Apple has finally put an end to its torrid love affair with the butterfly keyboard because, let’s be real, it really was a shitty keyboard. This is the first and last time you’ll hear me praising someone going back to their ex, because reuniting with the scissor-switch keyboard is probably the best decision Apple’s ever made.

The ‘Magic Keyboard’, as Apple dubs it (after its Magic Keyboard accessory, I assume), brings back all the things you knew and loved about the old MacBook keyboards, though with some improvements. For one, the travel rate has been extended to 1 millimetre, something I know we’re all thankful for. The Touch Bar and Touch ID are more or less the same, with the one vengeful return of the exalted physical ‘Esc’ key to the left of the Touch Bar, instead of being a part of it. The ‘inverted-T’ design of the arrow keys is back too.

The typing experience on this keyboard is also pretty sweet. It keeps the lightness of the Butterfly keyboard intact while still bringing back the scissor switches that give a nice push back on typing. All in all, the new moniker – the Magic Keyboard – is well earned since it does feel like magic how quickly and intuitively your fingers get used to it.

We’re Closer To 4K Than Ever

For those who’ve been using the 15-inch MacBook Pro, the display in the new model doesn’t feel startlingly superior. Still, you can definitely feel the difference. It’s not just the inches that are increased on the retina display, but also the pixel density and resolution. Yup! Now you get the native resolution of 3072×1920, with every inch of the display packed with 226 pixels.

While it’s not 4K yet, it’s still a good step forward from the former 2560×1600 resolution. Most users won’t notice or care about this difference, but those who do will definitely be happy.

Plus, the latest MacBook packs enough power to allow you to connect up to two 6K screens, two 5K screens, or four 4K screens simultaneously. Or you can mix it up and connect a 5K and four 4K screens together, all at 60Hz refresh rate. This is great news for those who are thinking of getting their hands on Apple’s Pro Display XDR monitors, as they’ll be able to run them on their full 6K resolution with no issues.

So Close, But A Little Bit Far

The one thing that really sucks about the 16-inch MacBook Pro is that Apple doesn’t offer customization options in India. I mean, I personally wouldn’t want to upgrade to 8TB storage or 64GB RAM, but I’m sure there are others who might want to, and having that option would be nice!. For now, unless you go through the hassles of getting it imported from abroad, these bespoke options remain out of our reach.

There are still only four Thunderbolt ports for connecting and no SD card slot (but a somewhat surprising headphone jack). Not ideal, but it’s not a big issue either with how many Thunderbolt accessories have cropped up in the past few years. They’ve still not touched the camera, for some reason, which could really do with some improvements above the noisy 720p FaceTime camera we have right now.

Some users of the latest MacBook Pro are also experiencing issues with the display ghosting and ‘popping’ noises from the speakers. These are certainly not new issues in MacBooks but it’s disappointing to see them in a model that’s just been launched.

Despite some issues, the 16-inch MacBook Pro is the best MacBook we’ve seen till date and if you’re looking to invest in a Pro (especially for professional reasons), this is definitely the one you should get. The new high end MacBook Pro is faster, so much better, just a bit heavier, and definitely pricier, but so very worth it. Now, if you’ll excuse me, I have to go and beg-borrow-steal money to be able to afford this dream machine.