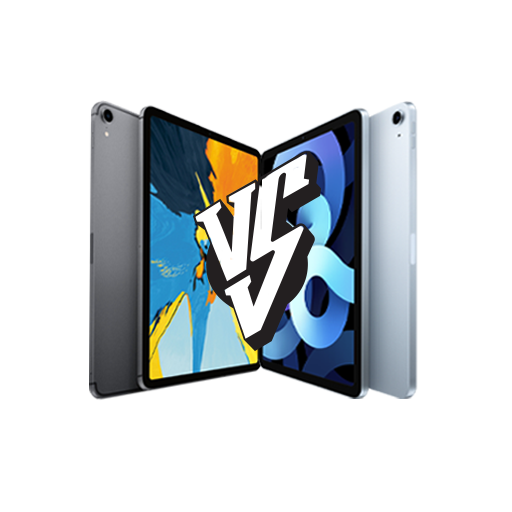 With no new iPhones at Apple’s September event, everyone was wondering which other product from their stable will get the limelight? Sure the Apple Watch S6, Apple Watch SE, Fitness+, Apple ONE, iOS14, and iPad 8 got their deserved attention, but one product that stood out of the crowd was the iPad Air 4.

With five colour options, a new A14 Bionic processor, Touch ID embedded in the on/off button, and a modern design architecture, the new mid-level tablet from Apple does seem promising.

This is the only iPad that has a full-screen display similar to the Pro series. Upfront, both the Air and Pro look so similar that you may not identify one from the other at first glance – which led to both awe and confusion. Buyers went into a dilemma, thinking which iPad is the best choice from them. And that’s exactly the dilemma that we’ll (hopefully) solve for you today.

Here are the key similarities and differences between the 2020 iPad Air and 11 inch iPad Pro models, starting with the price …

Both the devices are almost identical in dimensions. Both are 9.74 inches tall and have a negligible difference in width with the Pro being 7.02 inches wide and the Air at 7 inches. The more expensive iPad has a depth of 0.23 inches, and the latest model is 0.24 inches.

Apple’s flagship tablet and the new entrant have the latest Liquid Retina Display, have nearly the same screen size with the Pro measuring 11 inches, and the Air 10.9 inches. Both get the necessary anti-fingerprint and anti-reflective coating with fully laminated displays with Apple’s wide colour and True Tone display.

While Apple never reveals battery capacity, both devices seem to have the same battery life applications. According to the company, both can handle 10 hours of web browsing while on WiFi and 9 hours on mobile data. However, real-life conditions may differ, and we will get to assess this point further only after we get the Air 4 for a hands-on review.

The gap between a laptop and a tablet was bridged ever since the Magic keyboard made its debut. I have fallen in love with it from day one, and I finally put my laptop to rest. Like all the other similarities, both the iPads are compatible with the Magic Keyboard and the second generation of the Apple Pencil. You can also pair either of the devices with the Smart Keyboard Folio.

Both the devices get the ‘Hey Siri’ voice command activation and get WiFi 6 wireless connection technology. The cellular models of either of the tablets have a physical Nano-SIM tray, and you can add an e-SIM. Apple has ditched the Lightning connector for a USB-C port on both the iPads for faster charging and data transfers.

While the iPad Air begins with 64GB of internal memory and has only two options, with the other variant getting 256GB of storage. The 11 inch Pro model’s variants start with 128GB and have four internal storage options: 256GB, 512GB, and a monstrous 1TB alteration.

The iPad Pro has a higher 2388×1668 resolution and 600 nits of max brightness with ProMotion technology that results in a 120 GHz refresh rate. The newer sibling gets a 2360×1640 screen resolution, a maximum brightness at 500 nits, and misses the ProMotion higher refresh rate tech.

The major aspect that’ll force users to go in for the Air 4 is its processor, the debut of the latest generation A14 Bionic Chip that’ll also do duty on iPhone 12 series. The capabilities of this processor are still unknown until we get our hands on the device. If we go by the specs sheets, the A14 is the most powerful processor from Apple. The 11 inches Pro spots a tweaked version of the A12 Bionic chipset called A12Z.

The iPad Pro has dual rear cameras, a 12MP Primary Wide, and a 10MP Ultra Wide. While the Air 4 has a single 12MP Wide camera. Both have a 7MP front camera, but the Pro gets a TrueDepth iteration capable of capturing Portrait selfies and can create Memojis and Animojis. The cheaper iPad misses all of these and gets only a FaceTime HD alteration.

Face ID is limited only to the Pro models of the iPad family. The Air 4 gets an Apple-first Touch ID embedded in the Power button. Both models have the necessary sensors, and only the LiDAR sensor is missing on the Air 4. This scanner helps in displaying more accurate results in Augmented Reality while reducing the loading time.

It all boils down to your user preferences and budget. If your iPad has replaced your laptop, you will need Pro’s added storage, plus the display with ProMotion technology and higher refresh rate is a treat to the eyes. The new Air 4 steals the show with its upgraded powertrain and those great colour options in the design segment. Unlike the Air and Pro models in MacBooks, there’s not much of a difference in weight between the two iPads.

We have already gotten used to the swipe up to unlock feature on the Pro. How convenient will the Touch ID be placed on the lock button is yet to be tested after we physically receive the device. To sum up, if you’re on a budget and want to enjoy ‘a full-screen iPad,’ the Air 4 has a lot going for itself even though the bezels are a bit thicker than the Pro model. However, the iPad Pro has a reputation for being a laptop killer.

I would love to hear which iPad do you like better and why. Share your thoughts in the comments section below.