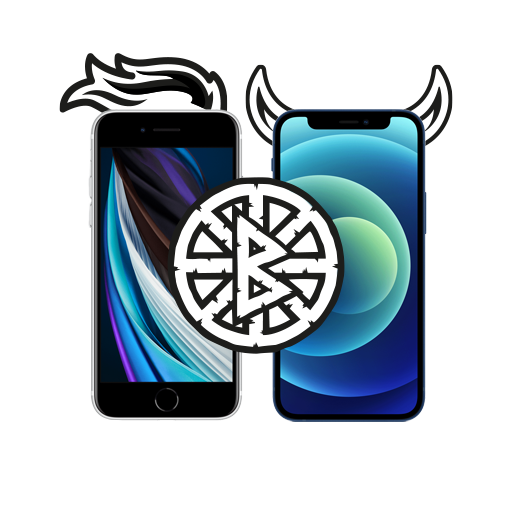 Battle of the Dwarfs: iPhone SE vs iPhone 12 mini

Amidst the crowded segment of smartphones bigger than 6-inches, Apple has decided to sell two small phones. Case in point: iPhone SE vs iPhone 12 mini. Around half a decade ago, Apple had taken a similar step by launching the first generation SE, which was relatively smaller than other smartphones during that time.

Come 2020, and Apple launched the second generation of the SE model. Though the SE 2020 had a similar chassis as its predecessor, the contemporary processor and features made it modern enough to compete against larger budget flagship models.

One year later, Tim Cook and company launched the Apple iPhone with a much-needed design revamp. A completely new mini device was introduced along with the iPhone 12, Pro, and Pro Max models. Though the iPhone 12 mini is about the same size as the SE 2020, its edge-to-edge display makes the device stand out from the second generation of the SE iPhone.

Though both the devices classify as dwarfs compared to much larger smartphones on sale today, small phones do have a fanbase of their own. Hence, this Apple iPhone comparison of both the under-5.5 inch devices will give you an idea of which one deserves a home in your pocket and a hole in your wallet.

The Apple iPhone 12 mini is ₹30,000/- more expensive than the iPhone SE 2020. However, both the devices are available in the same storage options. With 64GB being the entry-level variant, both the small phones are available in a 128GB and a top-of-the-line 256GB hard drive capacity.

The newer mini device is equipped with Apple’s Super Retina XDR LED screen in terms of display technology. The SE 2020 is installed with the LCD Retina HD display. Nevertheless, both smartphones support haptic touch technology. The iPhone 12 mini and the SE 2020 are compatible with Qi-based wireless charging tech, but the 12 mini has a slightly longer battery life.

No doubt, the iPhone 12 mini has a better front-facing camera than the Apple iPhone SE 2020. With features such as slow-motion video recording, night mode, and deep fusion, the latest generation of Apple’s iPhone is better at taking selfies. Also, the iPhone 12 mini supports Animoji and Memoji.

The SE 2020 is installed with a single rear camera and the mini has a set of two lenses. The mini is capable of shooting 4K videos in Dolby Vision technology and due to the extra camera lense, the iPhone 12 mini is better at image stabilization. The mini even outperforms the SE in rear cameras.

Although both the small phones have similarities, it’s the differences that’ll help you make the right choice. In terms of dimensions, both the devices are almost identical. It’s the mini’s edge-to-edge display and revamped design technology that makes it a better device to hold.

Also, the Mini’s faster processor and better front-facing camera along with the dual rear camera make the newer device take better photos and videos. Albeit, both the devices are compatible with Qi-based wireless charging, and in day-to-day usage both the devices will have similar battery life.

Even though both the devices are almost the same size, it’s the iPhone 12 mini that’s a clear winner in every aspect. Hence, it boils down to the budget. Are the added features and edge-to-edge display justify the ₹30,000/- premium? Let us know in the comments below.