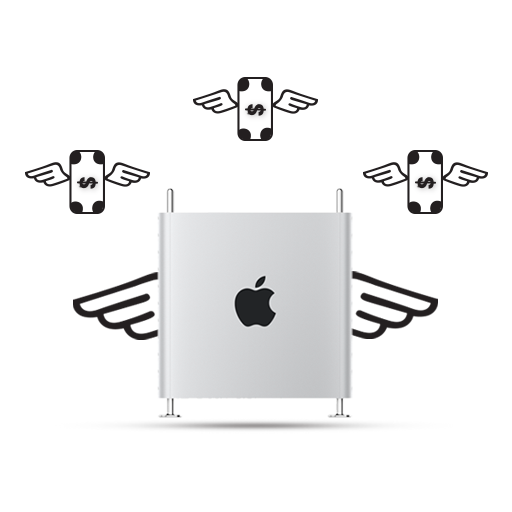 Never underestimate Apple! It’s already known for its frankly ridiculous prices, and now the company has taken it a step further by launching an all-new cheese grater (an upgrade from the trash can, I guess) at the meagre cost of $5,999 for the base model or roughly $53,000 for the top-end model with all the upgrades.

The first question that comes to any sane person’s mind is: Who approved this hideous design? And secondly, who in the wide world is their target audience—NASA? ISRO?

Anyway, according to Apple, this shiny new high-end Mac Pro is “extreme in every way”. And we agree! Here are 5 reasons why I love the pricing of the Mac Pro.

Who doesn’t love wheels? I’m all for portability and putting wheels on an 18kg mammoth is somewhat of a necessity that Apple ignored on the 2013 Mac Pro (but let’s not talk about what a flop that was). So, good job, Apple, on learning from your mistakes! But there’s a catch (isn’t there always?). These four little wheels cost $400. That’s a $100 per wheel! Does anybody else feel that this is excessive and unreasonable?

To use this powerhouse of a Mac, you need a monitor, right? Well, Apple’s selling the Mac Pro alongside it’s new Pro Display XDR, which is fantastic and all, but it will also cost you $4,999. Yup! And if you want it in the fancy nano-texture matte finish, get ready to shell out $999. Wait, there’s more. If you want a stand for that fancy monitor (which I would assume you do), there goes another $999! (Or $199 if you choose to get Apple’s VESA mount adapter instead.)

No simple microfiber cloth shall touch the holy nano-textured screen except the “dry polishing cloth” that comes with the Pro Display XDR if you choose to get the matte-finish done. What if you manage to lose the cloth (let’s face it)? Well, you can order a replacement online (no, not at the store), but Apple has given no indication whether it will cost you or not. Plus, the cloth itself comes with its own little care routine for cleaning. Thankfully, there’s no special water or soap you’re required to use, otherwise, you’d have to make a separate shopping list for your precious microfiber cloth.

For a $5,999 machine, the base model comes with a boatload of nothing to justify its price range, with an almost insulting storage capacity of 256GB SSD (less than my first MacBook) and a 32GB RAM. Nope, you can’t even expect 512GB SSD, which is the storage capacity of the base model of the latest MacBook Pro. It also comes with an AMD Radeon Pro 580X graphics card, which isn’t exactly what you would expect in such an expensive workstation.

We all know Apple’s love for charging extra for ‘additions’ and the Mac Pro is no different. You can upgrade the Mac Pro up to 8TB of storage, 1.5TB memory, a 28-core processor, and an AMD Radeon Pro Vega II Duo graphics card—but every little upgrade is going to cost you in a big way. The total comes to roughly $53,000 for those poor souls who choose to go in for the fully loaded beast-of-a-machine. Just upgrading from 256GB to 1TB SSD will cost you an extra $400, so you can imagine how the rest goes. The one good news out of all of this is that you can fully customize all the parts of the machine all by yourself for way cheaper than what Apple’s offering, so please don’t give in to capitalism and explore your options.

Thank you, Apple, for giving me a hearty laugh! I think I’ve added at least 5 more years to my life. Anyway, what do you guys think about the pricing? Reach out to us in the comments below.