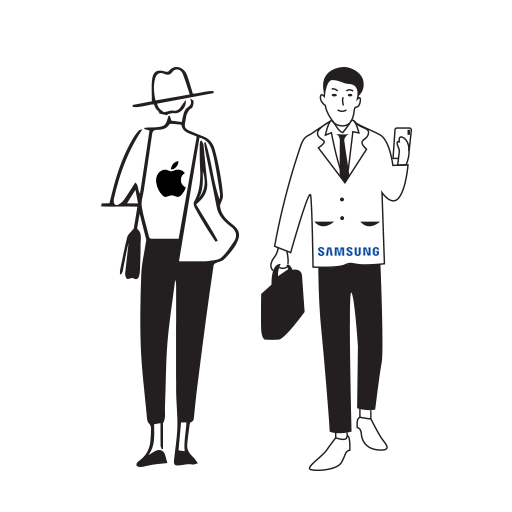 A few years ago, I switched from a Samsung Galaxy Note 5 to an Apple iPhone 7 Plus. To be honest with you, I’d been one of those “people buy iPhones just for the hype” kind of person, but I started getting intrigued when I saw my friend’s iPhone 6 and finally decided to get my own when 7 Plus dropped. I haven’t gone back ever since. However, despite my migration to iPhones because of its features, I know that for a lot of people iPhones have been mostly about the status symbol. I mean, I know people with iPhones who don’t even know how AirDrop works—which is insane to me because it’s one reason why I would never give up my Apple ecosystem.

So, after I’ve said all this, you might be wondering why I dared to title this article what I did. Well, before you scoff at me, hear me out.

Since, perhaps, the beginning of time, people have held many a heated discussion over the whole iOS vs. Android issue. No matter who you are, if you’ve got enough money to buy yourself a smartphone, chances are you have an opinion to weigh in on the topic. And these days, it’s become less about iOS vs. Android and more about Apple vs. Samsung. Of course, there’s Nokia and all these other Android brands, but no brand gives Apple a run for its money like Samsung does. You can’t forget the patent wars, after all, which have only recently cooled down.

It’s obvious where we stand on the issue (we are called “AppleSutra” after all), but that’s not to say that we deny that Android smartphones have got some pretty cool features that are almost enough to tempt you sometimes. To give you an example, something I’ve always been salty about is the dual-screen feature in Android phones that I wish we had in iPhones. It was a privilege I took for granted in my Note—oh, how I miss those sweet days where I could watch a video and scroll through Twitter at the same time—and it hurt me the most when I transitioned to an iPhone.

But are these small features enough for me to give up my Apple iPhone? Until recently, my answer would’ve been a short and simple no. However, while before I’d been able to ignore the little features that used to tempt me, Samsung’s newest range—with the flip phones and the S20 series—is kind of doing a good job of slowly wooing me.

Since the beginning, Apple’s been leading the game when it comes to innovation. No one can deny the huge influence the company has had in bringing the smartphone and technology industry to where it is today. While brands like OnePlus still seem to be playing catch-up, there’s one company that has over the years proved itself to be a strong competitor: Samsung.

Still, previously we could’ve said that the two companies were focusing on two different types of audience and thus were co-existing somewhat peacefully. Apple had the more elite part of the market cornered, who were able to afford its pricey gadgets during a time when gadgets were only a privilege and not somewhat of a necessity, while Samsung (alongside other Android companies) took over the section that wanted budget options and a higher scope of personalisation in their gadgets.

Now, however, the lines seem to be blurring as Apple forays into the world of more affordable gadgets while Samsung gains foothold in the high-end smartphone league. While the Apple iPhone wins hands down when compared to the previous Samsung models, things get more complex when we consider the latest Samsung models. So let’s see where they stand in comparison to each other:

Apple started off with the most expensive phones in the market and has constantly been labelled as a brand for the elite. However, with its iPhone XR and the recent iPhone 11 series, the company has gone for more wallet-friendly pricing that, while still in the higher range, is affordable enough that people might be convinced to spend that much for a brand spanking new iPhone. Meanwhile, Samsung’s latest smartphones are priced unusually high, even for top-end Android models, with the base model Galaxy S20 starting at ₹65,559 and the S20 Ultra at ₹92,999.

A huge selling point of the new Samsung lineup is the 5G connectivity feature. However, it’s unsure how much that affects us in India, where it’ll probably take quite a while for proper 5G networks to be established enough that it matters to us. Either way, we’re hoping to see 5G in the iPhone releases this year, so it might be a moot point anyway.

By far, one of the most hyped features of the S20 Ultra is its camera, which has a triple-camera system with an incredible 64MP telephoto lens. However, the reality may not exactly live up to the hype, as many reviewers have noticed issues in the autofocus and the 8K that prove iPhone 11 Pro’s camera much better and reliable.

If we had to pinpoint just one reason why someone would continue buying Apple, it’d definitely be the ecosystem. It makes life so ridiculously easy that you’ll never want to leave. Take the Notes app, for example. Is there any better alternative than this iCloud-synced app for note-taking and making sure random pieces of information are available to you no matter the device? Or perhaps consider something as simple as the copy-paste feature that you can sync between your Mac and iPhone via AirDrop, so that you can copy something on one device and instantly paste it on another. There’s really nothing like this with Samsung.

There are many other things I’ll miss if I were ever to migrate, such as the Face ID, iMessages, memoji, and all these cool features. However, there’s stuff to be liked in the new Galaxy phones as well, starting from the split-screen view and wireless earbuds charging on the back of the phone to the miniscule front camera notch and the quick in-display fingerprint sensor. Plus, there is the fact that Samsung phones offer a much greater personalisation than iPhones do, which can be tempting to someone who loves tweaking around with gadgets.

Honestly, to me this lineup from Samsung seems like only the beginning of their attempt to reach out to the type of audience that’s mainly attracted to Apple. What’s ironic is that it seems that Apple is doing the same thing, only in the opposite direction. While Samsung’s aiming for more exclusivity, Apple’s aiming for a higher market share by reducing its prices a little. (A strategy that seems to have worked when it comes to the Indian market, at least, with the massive success of iPhone XR and even iPhone 11.)

With Apple and Samsung reversing their business models like this, I don’t think the day is far when we’ll see Samsung as a premium brand and Apple as the people’s brand. After all, no phone that’s in everybody’s hand can retain its exclusivity. What it means for Apple in terms of brand image and value, however, remains to be seen but I wouldn’t be too worried. With all the innovative tech we’re looking forward to this year (I’m SO excited about AirTags), Apple’s throne remains secure. Still, the ensuing Apple vs Samsung fight might be entertaining to witness.

What are your thoughts on this whole thing? Do you think Samsung stands a chance or is their strategy going to fail? Talk to me in the comments below.