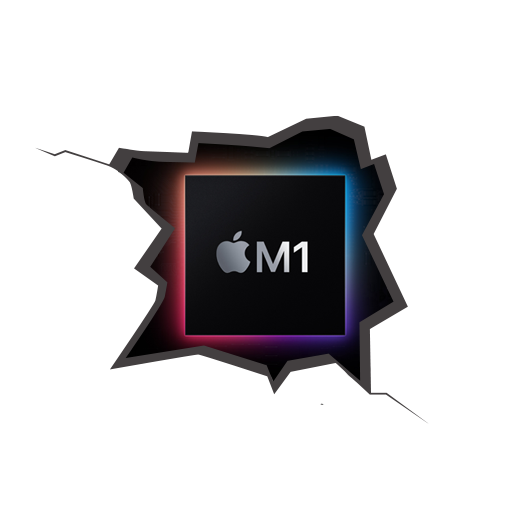 Apple Inc. started as a company that manufactured only one product – personal computers. Over the years, the company has undergone a sea change in its working style and product line-up. Currently, Apple’s iPhones, iPads, and AirPods are the most popular in their respective segments. In the process, many loyalists had started to wonder if Macs are no more important to Apple. But Tim Cook & team just put the argument to rest with a 2-word reply – Apple M1!

What is Apple M1?

Since 2006, Apple has been using Intel’s processors for its Mac series. We had been hearing about Apple launching a homegrown processor that’ll possibly be called Apple Silicon from a while now. Many may recognise it as ARM processor, a name given to its architecture and hence used more extensively. With the ‘One More Thing’ event, Apple has finally taken the wraps off and has introduced the M1 processor for the Mac computers.

The first-gen Apple M1 processor has eight cores and is built on a 5nm architecture that’s about 3.5 times faster than its predecessor. With five times faster graphic performance. In fact, as per benchmark ratings, the latest M1 processor in the MacBook Air has outperformed the MacBook Pro 16-inch by a surprising margin. What’s more the updated MacBook Air now spot the fanless CPU that has made them completely silent.

The M1 processor is built on the ARM architecture that’s more power-efficient, cost-effective and dissipates heat. Apart from delivering higher power outputs, an ARM-based processor is lightweight and the perfect choice for portable devices. Hence, the first Apple Mac to sport the Silicon processor is two of the most popular MacBooks, the Air and the 13-inch Pro. Apart from unveiling their laptops with the new processor, they introduced it to the Mac Mini CPU as well. Apple plans to transit from Intel processors to the M processors in the next two years for all their computing devices.

Apple has announced on multiple occasions that the Air is the most popular MacBook. Thus, when it came to choosing which Macs will have the first M processor, the MacBook Air had to be on the list. The best part is the price remains unchanged. The Air continues to start at ₹92,900/-.

Previously the Intel-based MacBook Air’s standard variant came with a dual-core processor but now with the Apple Silicon’s M series, the basic version, now sports an 8-core chipset. The RAM and internal storage remain unchanged with 8GB and 256GB on the entry-level model.

Apart from the change in processing speeds that battery life on the MacBook has increased substantially.

The Thunderbolt ports now are compatible with the latest USB 4 version, and the wireless connection technology now supports faster speeds thanks to WiFi 6.

Another notable change on the Intel MacBook Air 2020 and the latest model with the M1 lies in display technology. The current model now has a Wide Colour (P3) than the previous model’s Full Standard Colour Display.

Unlike the display tech that received an update on the Air, the 13-inch screen on the Pro models remain the same. With the inclusion of the M1 series processor by Apple, the basic variant of the MacBook gets the same eight-core chipset instead of the previous quad-core Intel i5.

What’s notable about the transition from Intel processor to Apple’s ARM-based M series is the considerable increase in battery performance. Though the size of the battery remains unchanged, the increase in battery capacities is due to the lesser power consumption from the processor. The updated Pro lasts twice as long than the outgoing model.

While the last update seen on the Mac Mini was in 2018, when Apple announced its ‘One More Thing’ event, an updated Mac Mini was highly anticipated. Unlike the MacBook Air and 13-inch Pro that came as a surprise. The best part: The Mac Mini is the only device that has received a price cut after Apple transitioned to their processor from Intel.

The eight-core M1 processor installed starts at ₹64,900/- and with the updated ports that support USB 4 technology. Which means you can upscale 6K content with a compatible display. The basic model comes with 8GB of RAM and 256GB of internal memory.

After the A series of processors on iPhones/iPads, they are introducing M series of chipsets for Macs. At Apple’s keynote and a few benchmark testings, it is pretty clear Apple has made one of the most powerful chipsets on the market. With the silent fanless CPU, power-efficient processor and eight cores as standard, the already irresistible Macs are even more alluring.

P.S: The updated MacBooks still ships with the charger inside the box 🙂