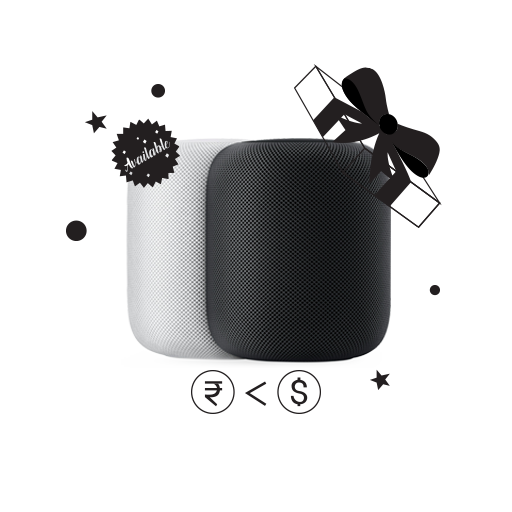 Surprise! The Apple HomePod Price in India is Lower Than in U.S.

We’ve got some good news to deliver: The Apple HomePod price in India is actually lesser than the U.S. pricing! Yes, we know it’s not the ‘Yay! Lockdown is over’ kind of good news—but hey, it’s definitely something.

The HomePod was launched in India in late January this year, almost two years after its U.S. launch. At the time, Apple India’s official site specified that the HomePod was available, but did not indicate where the device could be bought.

Now, however, Apple is sending out emails to users promoting the HomePod and directing them to local resellers, who are selling it for less than the HomePod’s price in the USA. Which is quite unusual, to say the least. No local Indian price has ever beaten a U.S. one for any Apple product, until now.

The Apple HomePod price in India is set at ₹19.9k, which converts to about $263, roughly 10 per cent below the HomePod price in the USA. Although Apple India does not currently sell any products online, its HomePod page now has a ‘Buy’ button that redirects users to a search tool for local and online resellers.

Apple’s major retail partners, Amazon, Flipkart, and Paytm do not have the HomePod in stock as of now, but we’re assuming that listings will soon start popping up. So if you’re living in one of the green or orange zones, you will soon be able to order it online as the Indian government has allowed delivery of non-essential items in these areas (Lucky ducks!).