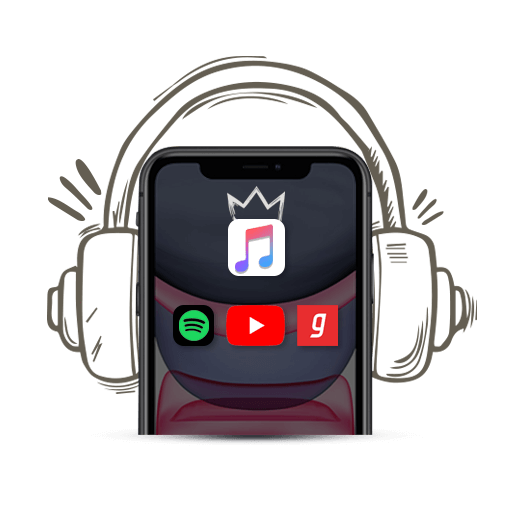 Every other week, if not daily, we see a new music streaming service waltzing into our country. As a result, India’s audio streaming market has witnessed a lot of action lately. And leading the action is the launch of the two most widely used music platforms on the globe – Spotify and YouTube Music.

And just like that, these two are locking horns with the likes of Apple Music, Amazon Prime Music, Gaana, Google Play Music, JioSaavan, and more. As for the music enthusiasts, are you feeling like a spoilt little brat yet? Well, the only problem that comes from being spoilt with so many choices is the difficulty to pick one! (First world problems!)

Well, here’s a showdown between the best four that might help you pick one, or not. Regardless, showdowns are always fun!

Spotify – The One That Always Hits The Spot

Spotify arrived in India, a month before YouTube Music made an appearance. And in just a week, it claimed to have hit the 1 million customers milestone. Now, Spotify is usually not the one to boast about the numbers and subscribers. But the recent announcement (show off much?) suggests that the claims made are true.

Along with a diverse selection of subscription plans, Spotify launched in India with a massive catalog. It consists of over 40 million songs and three billion playlists along with city-wise playlists and multi-language recommendations. Quite the number, huh? Oh almost forgot. – For all those Podcasts lovers sulking in the back, Spotify didn’t forget about you guys!

The newest cool kid on the block, YouTube Music, has over a 100 million downloads globally. Take that Spotify!

As far as their plan goes, YouTube is looking to leverage its existing user base in India. Oh well, who isn’t! But they aren’t talking about just the numbers (by numbers I mean overpopulation). They realize the importance of capitalizing on the high engagement rate provided by our ‘always online’ youth to get its music-offering going.

In just two days after its launch, YouTube hit the #1 app mark in the ‘Music and Audio’ category of the Indian Play Store. The streaming service is available in both the premium as well as an ad-supported option. It comes with smart search and a background play option that lets you hop on from one app to another and do other important stuff like scrolling through insta, send a double chin snap to your friend, picking out the next song to play after this one, and much more, all while listening to music.

As far as the basic features go, you can download songs, videos, playlists, live concerts, and more, and watch them offline while living that life in a metro! A month’s subscription would cost you around Rs 99 (20 bucks cheaper than Spotify). But, hey if you are a Google Play Music subscriber, your cool new YouTube Music Premium membership comes bundled with it.

JioSaavn was the #1 music app on Indian Play Store until YouTube Music came moseying in and stole its spot. And now, it’s down to #2. Born out of a merger between Jio and Saavan, India’s two most popular music-streaming apps, JioSaavn offers its users the best of both worlds. The large user base of Reliance Jio (280- users) merged with the extensive audio catalog of Saavn (available in 200 global markets). Sounds like a match made in music heaven, doesn’t it?

Just like its rival, JioSaavn also offers a free ad-supported model, as well as an ad-free subscription service (JioSaavn Pro) that can be availed at Rs 99 per month. And if you’re interested in a long-term relationship, you can go for their quarterly plan that costs around Rs 285 or for the half-yearly plan for just Rs 55. Now, don’t treat this as your gym p.

Eagerly waiting for the benefits of being a Jio user? Well, you can avail a free three-month trial of the ad-free subscription service. It houses over 45 million tracks in English, Hindi, and all major Indian languages.

Apple Music India – The One That You’ve Been For

Apple was the first international music service to test the waters by launching in India even when we weren’t very keen on paying for content. They believed in us to spend our money, and I am proud to say, we didn’t let them down.

Apple Music India was initially available for iOS only. Boy did I feel exclusive! But that didn’t last long as they launched the app for Android soon after (Of course they did!) and now have 10 million-plus downloads. But honestly, was it worth it Mr. Cook? Mixing our pious race of Apple fanboys and fangirls with Android people?

Anyway, let’s talk money now. The Apple Music monthly plans start from Rs 99 ($1.24) per month in India, whereas in the US it costs around Rs 700 ($10). Look at them wooing us Indians… Dayum I feel fancy! You can also get family plans for Rs 149 and special student plans for Rs 45 per month.

As far as the numbers go, Apple has never been the one to reveal country-specific numbers, but according to the reports, its music service had around 56 million paid subscribers all around the world at the end of 2018. Now, we know it’s your choice and no judgments here. But if you’re a true Apple-ite and a music enthusiast, you know Apple Music is your best bet when it comes to quality.

The Future of Apple Music in India

With streaming becoming second nature to Indian millennials, music-streaming apps are at an all-time high. According to the report by IMI and the International Federation of the Phonographic Industry, an average Indian Internet user spends approx. 21 hours per week listening to music. And thanks to that, industry revenues from music streaming have tripled in the last 12 months. No wonder brands are fighting to take the lead on this bandwagon. And this results in an over-crowded, cluttered market and a lot of confused customers.  But perhaps, there’s space for all. Or for a few at least.