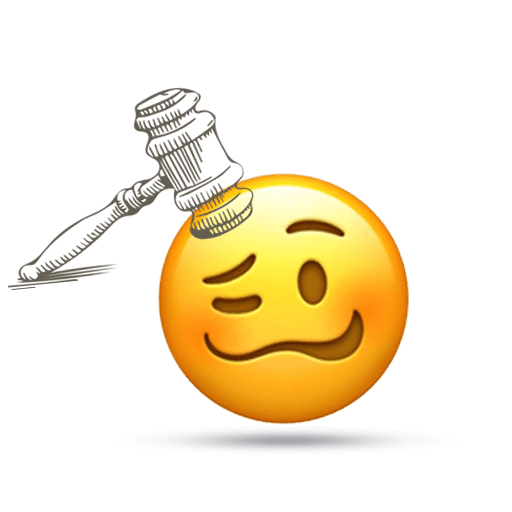 The Curious Case of Lawyers Arguing About Emojis in the Court

Just over a year ago, an Israeli judge ruled against a couple for “misleading” their prospective landlord based on a series of texted emoji. The emojis to be blamed: dancing lady, two people dancing, a peace sign, a champagne bottle, a chipmunk, and a smiley face.

The story goes thus: When this couple was interested in renting a place to live, they reached out to the landlord to talk further. The landlord deduced from their previous conversations and texted emojis that the couple was going to move forward with renting the space, and took down the ad soliciting as available. However, the couple stopped responding to the landlord’s messages, and that’s when things got ugly and he filed a lawsuit against them.

Verdict: In court, the couple emphasized that they were not impressed with the condition of the house and weren’t planning on renting the place. Yet, the judge ruled in the landlord’s favour. According to the judge, even though the series of emojis were not together in one text (or even one conversation), they all conveyed “a great sense of optimism”. And, the couple had to walk away owing $2,200 in small claims court.

They say “An image is worth a thousand words”. In this case, it turned out that “emojis were worth thousand dollars (sometimes).”

As per reports, this wasn’t the only court case where the meaning of an emoji was interpreted to sway the direction of the case. Apparently, there were over 50 such cases the last year itself. However, the first case came into the spotlight back in 2004. And, since then, there has been an exponential rise in emoji and emoticon reference in court cases.

Another such example is a criminal case. Prosecutors were trying to prove that the man arrested during a prostitution raid was guilty of pimping charges. Among the evidence presented to the court, there was a series of Instagram DMs he had allegedly sent to a woman. One read: “Teamwork makes the dream work” with a crown, a pair of high heels and a money bag emojis.

The prosecution argued the message referred to “the working relationship” between the two parties. The defence, on the other hand, said that the man was trying to strike a romantic relationship.

The rate at which people are using more of emojis and less of letters (and even lesser meaningful words and phrases) in their conversations, we’re going to see emojis show up more frequently in court cases – be it criminal and civil cases or in general.

However, there is a complication in decoding the meaning of emoji. When the same Unicode character appears very differently on different platforms, on what meaning can the court decide upon? For example, Apple switched the pistol emoji to a water-pistol back in 2016, while every other platform at the time rendered it as a revolver. An iPhone user could innocently send a message which might be perceived as a threat to an Android user.

Thankfully, that one is no longer an issue after Microsoft, Facebook, and other platforms followed Apple’s example and change the emoji last year. The irony is that Microsoft started out with a toy gun before switching it to a real one in 2016 – just as Apple did the opposite.