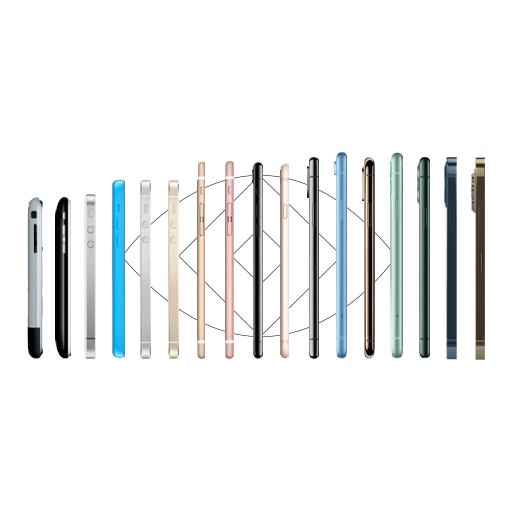 The Evolution of iPhone Over the Years

Apple recently launched the iPhone 13, and it made us nostalgic thinking about all the iPhones released over the years. The first model of the iPhone came out way back in 2007, and since then, Apple’s smartphone has come a long way. We thought a recap of iPhone history would help everyone understand the technological advancements that came to the iPhone by generations of consecutive models. So, here’s a quick look at the evolution of the iPhone since the first one launched.

iPhone Models in Order of Release

Below, you will find interesting information about all iPhone models. From old iPhones to the latest 13, we’ve listed every model with the revolutionary features announced year after year. All iPhone types released till date have had some kind of features that made Apple one of the most popular smartphones globally.

The first iPhone launched in 2007, and it had a 3.5-inch screen. Speak of the real mini, huh? The first iPhone sported a 2MP camera and a multi-touch display. The entry-level model came with 4GB of internal storage, and the top-of-the-line variant offered 8GB storage. Another 16GB variant was announced later. Though the device had the best and the most innovative multi-touch panel, industry experts believed that Apple would fail since the price of the iPhone was way too high.

A year later, Apple introduced the iPhone 3G, the first smartphone by Apple to get faster 3G mobile internet connectivity. This iPhone model had built-in GPS for location services. Apple upped the entry-level iPhone version’s internal storage to 8GB, and the higher variant had a maximum capacity of 16GB onboard memory.

Apart from having a faster processor and a maximum storage capacity of 32GB, the iPhone 3GS remained relatively similar to the iPhone 3G.

Keeping in line with the S monochrome that determined Speed, the iPhone 4S was the first Apple smartphone to have a dual-core processor. Though the form factor remained similar to the previous generation iPhone model, the 4S offered a larger 64GB storage option.

The evolution of the iPhone took a big leap with the iPhone 5 models. The iPhone 5 debuted with what’s regarded as the most-loved design on an iPhone. It was the first Apple smartphone to have a larger 4-inch display and a slimmer body. The iPhone 5 soon went on to be a chartbuster model for Apple.

Post the launch of the last successful smartphone, Apple introduced the iPhone 5S and 5C variants. Though both the devices didn’t have a revolutionary redesign, the iPhone 5S was the first Apple smartphone that came with the Touch ID fingerprint sensor. The 5C came in various colour options to cater to young customers looking for a funky iPhone model. The 5S, on the other hand, was the first iPhone model that came in a gold colour option. Also, the iPhone 5S saw the introduction of Apple’s 64-bit A7 SoC processor.

Another couple of devices that could easily be classified as a massive point in the evolution of iPhone were the 6 and 6 Plus models. Both the devices were upgraded with the A8 processor that was faster than its predecessor. The screen size also increased on the regular iPhone 6 to 4.7-inches, and the Plus models had a massive 5.5-inch screen. Both the iPhone models had upgraded cameras and were the first Apple devices that were NFC-ready.

The S models of the 2014’s iPhone models witnessed the introduction of Apple’s A9 processor and 12MP rear cameras for 4K video recordings. The front camera also upgraded to a 5MP camera for better FaceTime calls and selfies. Furthermore, the 6S and 6S Plus included Apple’s force touch technology called 3D Touch. The iPhone 6S was such a revolutionary device that it is still compatible with Apple’s latest iOS 15 upgrade.

Apple’s evolution of the iPhone went up to the next level with the launch of the iPhone 7 and 7 Plus. Though the 2016 iPhone models did not have a major redesign from its predecessor, the iPhone 7 and 7 Plus were the first devices that came without the headphone jack. Apple installed the A10 Fusion chip on the 7 series, and the larger 7 Plus was the first Apple smartphone to have a dual rear camera set-up. Also, 7 and 7 Plus came with 32GB memory as standard, and customers could opt for larger 128GB and 256GB internal storage options.

Alongside the iPhone 8 and 8 Plus, Apple announced the iPhone X to mark ten years of the iPhone models. The X saw the biggest evolution of the iPhone with the introduction of a full-screen device with a notch. Also, the X was the first device that came with the Face ID authentication feature. The X came installed with the A11 Bionic processor with a 5.8-inch Super Retina OLED display. Since the front cameras had a TrueDepth sensor, the iPhone X was the first iPhone model that introduced Apple’s Memoji and Animoji features. Moreover, the iPhone X’s display was capable of Dolby Vision HDR 10 photos and 4K videos.

What the iPhone X started was taken forward with the S series. 2018 was the first time Apple introduced the largest 6.5-inch display size on an iPhone with the XS Max model. Though the design remained unchanged, the iPhone XS and XS Max came with water and dust resistance. Also, the XS and XS Max were the first Apple smartphones to come with dual-SIM support in one eSIM and one regular SIM. The XS and XS Max launched in 64GB, 256GB, and 512GB variants supported by Apple’s fastest A12 Bionic processor.

With the 5.8-inch and the 6.5-inch XS devices, Apple added another entry-level iPhone XR with a 6.1-inch Liquid Retina display instead of an OLED screen on the larger and the smaller device. Though the XR didn’t have a dual-camera set-up or an OLED display, it still went on to be the most successful iPhone model. Also, the iPhone XR offered various vibrant colours.

The iPhone 11 had the same 6.1-inch Liquid Retina display from the XR, but Apple made sure it got extremely capable dual rear cameras along with an upgraded A13 Bionic processor. It had a larger battery life and a stronger rear-glass panel. It also offered various colours.

Apple introduced the first Pro badge on iPhone models, taking the same screen size and the design route from the previous generation 5.8 and 6.5-inch models. Part of the package included the Super Retina XDR display and triple-rear camera set-up. The front camera also sported a larger 12MP lens for fantastic portrait selfies. Like the iPhone 11, the Pro and Pro Max variants came with larger batteries and an A13 Bionic processor.

Analysing the success of Apple’s consecutive 6.1-inch devices, the XR and the 11, the tech giant introduced the majorly redesigned iPhone 12 model. Unlike the previous 6.1-inches entry-level flagship models, the 12 came installed with the same Super Retina XDR OLED display that does duty on the Pro variants. The company also introduced the 12 mini with a smaller 5.4-inch display. The entire iPhone 12 series witnessed a much-needed change in design philosophy with larger screens and thinner bezels.

Though the iPhone 12 models were launched amidst a global pandemic, the health crisis didn’t affect Apple’s iPhone 12, which was the most successful iPhone model in years. The iPhone 12 and 12 mini were installed with Apple’s powerful A14 Bionic processor with 5G capabilities, good battery life (at least on the regular 12), and Ceramic Shield protection.

The change in design philosophy resulted in Apple ditching the earlier 5.8-inch screen size on the Pro model and replacing it with a 6.1-inch display. Similarly, due to the thinner bezels and flatter screen, the Pro Max came with a 6.7-inch display, the biggest iPhone ever. Apple also carried forward the Super Retina XDR display and triple-rear camera set-up along with the LiDAR scanner for a wonderful AR experience. A certain Dolby Vision technology for video recordings was a part of the highlighting features of the iPhone 12 Pro and 12 Pro Max. Like the iPhone 12 and 12 mini, the Pro models came with an A14 Bionic processor, 5G, and Ceramic Shield protection.

The iPhone 13 series are the latest iPhone models from Apple that launched this year. Even though the iPhone 13 models looked identical to the iPhone 12, the Cupertino tech giant managed to bring notable features. The iPhone 13 and 13 mini have a faster 5G A15 processor, resulting in longer battery life. Part of the design changes includes a thinner notch and diagonally aligned dual-rear camera set-up. Furthermore, as a part of the evolution of the iPhone, Apple has introduced a Cinematic Mode feature for video recordings. The base 64GB variant has been replaced to accommodate a larger 128GB entry-level model at the same starting price.

Like the 13 and mini iPhone models, Apple barely upgraded the Pro and Pro Max variants apart from a thinner notch. However, the 13 Pro and Pro Max have upgraded triple-rear cameras that have been regarded as industry-leading in early testing. Moreover, the biggest evolution on the iPhone 13 Pro and Pro Max models comes with ProMotion display technology that results in a 120Hz refresh rate.

Which is your favourite iPhone model till date? Drop them in the comments!