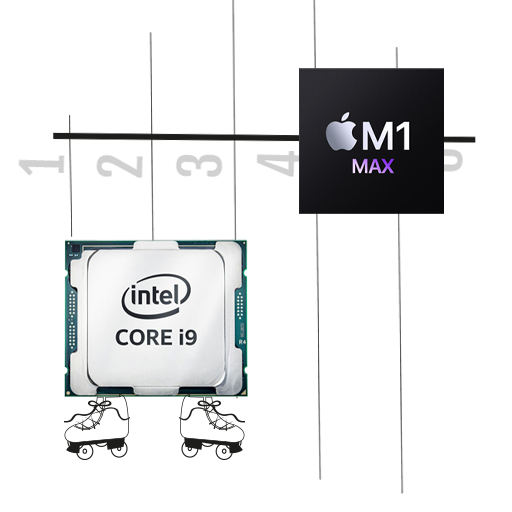 Intel claims that the 12th generation of the Intel Core i9 processor will outperform Apple’s M1 Max chipset. After unveiling the latest MacBook Pro laptops, Apple introduced two new iterations of their M1 chipset launched last year. The M1 itself turned out to be a great processor, and it even does duty on the iMac and Mac mini desktops along with the MacBook Air and the iPad Pros.

The M1 instantly became a hit and surprised everyone in benchmark testing. Moreover, Apple didn’t stop there and introduced the M1 Pro and the M1 Max. Apart from being super quick, Apple’s ARM-based silicons are extremely energy efficient.

To the Drawing Board

When Apple decided to transition from Intel, there was a lot of speculation about whether they could manufacture industry-standard processors. But the Cupertino tech giant proved its mettle and created industry-leading processors. The M1 is so good that it forced other chip makers to return to their drawing boards. Recently, Intel unveiled the 12th generation of the i9 processor and claimed it’ll be faster than the M1 Max.

Only a while ago, the company that lost market share due to Apple’s going their own way had hinted at wanting the Mac business back. However, with Apple successfully making brilliant processors in their first generations, the shift is unlikely.

We will know for sure once we have benchmark and real-world figures of the i9 processor, but that’s not the end of the story. Even if Intel’s 12th generation processors overtake Apple’s silicon in frequency rates, power consumption is still an ace of the MacBooks. Where i9 processors require 115 watts of power, the M1 Max settles for 60 watts most of the time and only during extreme workhouse conditions reaches 90 watts.

The power-efficient ARM architecture of Apple’s chipsets allows them to make more compact and silent devices. The traditional x86 architecture that Intel manufactures won’t be able to beat Apple in terms of battery life on laptops. Still, this competition between Intel and Apple can’t be bad for us. What do you think? Will Intel’s Core i9 processor beat Apple?