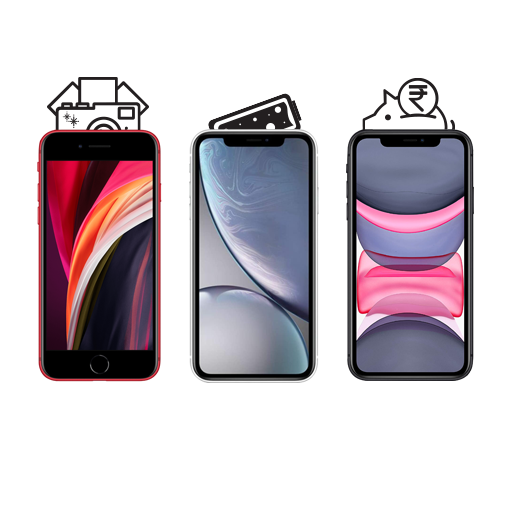 Behold this new beauty, people! Apple has finally launched its much-awaited, low-budget iPhone SE and we are in love. The second-gen namesake to the sensational iPhone SE 2016 has a high resemblance to the iPhone 8 in design but packs a lot of features from iPhone 11 that fans have been expecting. Priced at ₹42,500 (slightly higher than anticipated), this sleek beast is set to enter Indian markets with a bang.

The newest addition to the iPhone family has left many who were planning to buy a new iPhone in a dilemma. iPhone SE vs iPhone XR vs iPhone 11: Which should you get? Well, let’s see where the new iPhone stands against these challenging odds.

Round 1: Design and Pricing

iPhone family’s newest member sports a home button, unlike the other two phones here, taking on a more traditional design. At ₹42,500, it’s also the most affordable iPhone we’ve had in years with such power-packed features. The other two, the fan-fave iPhone XR and the powerhouse iPhone 11 are placed at ₹48,900 and ₹64,900 respectively. iPhone XR has the edge over iPhone 11 here as it provides only a slight drop in performance against a significant price difference.

SE also interestingly brings back the 4.7-inch display which, I have to say, many of us have been missing for long. (I can’t be the only one, right?) It’s also lighter than the other two. A powerful, light smartphone that also fits perfectly into your palm? Ah, those were the days.

As for display quality, there’s almost no performance drop in resolution, even though iPhone SE has a significantly smaller display. All three models are packed with a pixel density of 326 ppi.

Round 2: Performance and Storage

When we said earlier that iPhone SE has some of the most awesome features of iPhone 11, we had the A13 Bionic chip on our minds. iPhone XR falls short on paper with its slightly older A12 Bionic processor. We wouldn’t call it bad per se, but the other two are just better—especially for gaming purposes. (cc @gamers)

As far as the storage is concerned, iPhone SE and iPhone 11 both come in 64GB, 128GB, and 256GB models. However, iPhone XR does not have a 256GB variant. So, if you’re looking for heavy storage capabilities, you might want to get one of the other two.

Now, obviously, you cannot go expecting a quad-cam TrueDepth setup from a mid-budget phone with the newest A13 processor. However, the iPhone SE has a decent single-lens 12MP rear camera and 7MP HD front camera. Its competitors, however, sport a TrueDepth camera quality. The iPhone 11 especially has a dual-lens 12MP ultra-wide rear camera, easily making it the best camera choice here.

Apple claims that the iPhone SE’s camera is the “best single-camera system” in an iPhone, thanks to its A13 processor, but we’re yet to test that out.

iPhone SE falls slightly short on one critical aspect: the battery life. And we mean that strictly for heavy-users. While it’s still early to confirm, Apple says that the iPhone SE will have around 13 hours of video playback (almost the same as that of the iPhone 8).

iPhone XR manages pretty decently, with its 2942mAh battery capacity and 16 hours of video playback time. iPhone 11 does even better than iPhone XR when it comes to battery life, taking the cup home.

Compared with the other two, iPhone 11 undoubtedly reigns superior here. However, if you ask me, the 2020 iPhone SE does fairly well with its friendly budget and amazing specs.

Here’s a detailed chart of the iPhone SE Vs iPhone XR Vs iPhone 11 comparison.

The new iPhone has already overtaken iPhone 8, and chances are that it’ll soon be the new favourite among Indian Apple fans. Will it take over the iPhone XR, though? What do you think?

iPhone SE vs iPhone 8: Who’s The Last One Standing?