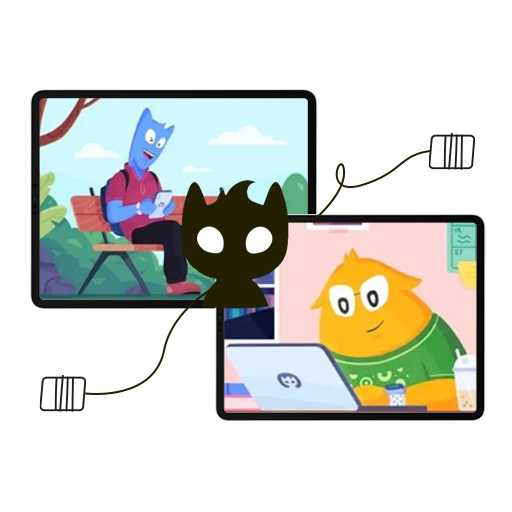 Apple recently released iOS 15.1, which brings the much-anticipated SharePlay feature that lets you listen to music and watch movies together online over long distances through FaceTime calls. And while we’re loving this new addition to our video call experience and had been breathlessly waiting for it to finally arrive, it’s safe to say that it’s kind of underwhelming. And that’s for one reason only: it doesn’t support most apps we use. No Netflix, no Amazon Prime, and definitely no random third-party video streaming services that don’t support the feature.

It’s a bummer, to be honest. Hopefully, they’ll come around later, or this will end up becoming another Apple-specific feature that only users chained inside the Apple ecosystem will be able to enjoy somewhat. Until then, I’ve got a solution for you!

Chances are that if you’ve tried to watch a series online with a friend or a partner, you’ve looked up a heck lot of services and extensions. Rabb.it probably came up (RIP) and Teleparty was probably there too. Well, I’m here to recommend another tried and tested app that you’ll like. It’s called Hyperbeam.

Watch Together with Hyperbeam

I’m used to watching things online with friends, since most of my “social” time is spent on Discord servers or talking to friends who live miles away. Hyperbeam’s one service that I’ve stuck to for the last year or so, and I thought I should share it with you all.

But first, what is Hyperbeam? Is it a screen sharing app?

Well, no. It actually offers “shared browsing”, which means it’s a separate browser entirely that you and whoever’s watching with you can both control, depending on who has the remote. You can use it directly like any other browser, and whatever’s on the screen will be visible to everyone you’ve invited into the room with you.

So, now that we’re on the same page, here’s my review.

I mainly use this site for two things: to watch shows and movies together with my long-distance friends and to have impromptu karaoke sessions. That’s why I absolutely love that Hyperbeam gives you the option to video and audio call alongside whatever’s playing on the screen, so you can avoid that god awful feedback noise when playing the same audio on call. Now, you might ask, “What happened to good ol’ video calling while coordinating play/pause timings?”

To that, I’d say, “Do you have to sound so old?” Kidding, I’ve tried that too, of course! I’d just rather not have to mute each other and frantically wave our hands every time we need the other’s attention. Thanks to, again, feedback caused by the audio. There is a little bit of an echo sometimes with Hyperbeam, but it’s ignorable.

I also prefer shared browsing services over video syncing with SharePlay or other extensions, for the simple reason that it’s just too restrictive. Of course, you get the best experience when the content you’re playing can run natively on your device, but everyone won’t necessarily have access to that content. Plus, such apps or extensions only work with a few specific websites, so your options get much more limited there.

One reason I prefer “virtual machine” services like these over the usual screen sharing methods is that it prevents a lot of the lagging issues. If you’ve ever tried to watch something with your friends over a Zoom call, you’d know that screen sharing just does not work very well. Of course, there’s Discord, which makes screen sharing a better experience, but it’s just not as smooth as content running directly on your device.

That’s exactly what services like Hyperbeam do, albeit in a kind of “browser running in another browser” way. It’s not perfect, because I still had times when the video froze or lagged, but it’s one of the best options.

Hyperbeam offers a freemium type of service, where users can access most of their services for free and pay a premium for some of the perks. While I was testing the app, the time limit for free rooms was 2 hours and unlimited for paid users, but I recently heard they’ve increased the time back to 3 hours for free users.

The free version is great for the average user who just wants to watch a movie or a couple of series episodes together, or otherwise surf the web with others for three hours or less. You have to wait a little bit sometimes before you get your time when their servers are especially busy, but it’ll only be a bother for really impatient people (no judgement!). After you’ve used the free room for 3 hours, there is a short 10-minute cooldown period before you can use the room again.

I also tried the premium version, and it gives you access to some pretty cool perks. For one, you don’t have to wait in the queue for a room, and there’s no cooldown period so you can use the space however long you need to. Perfect for weekend binging sessions! The premium subscription is $4.99 per month, which comes to about ₹374 per month.

The subscription also allows you to claim custom room links, maximise the quality of the video, save the sites and extensions you frequently use or where you last visited, and customise your profile colours! You can also appoint room moderators with premium, which is super useful for bigger groups.

If you watch movies together with people over long distances, you’ll probably like this feature. I usually watch with people across regions and countries, which can lead to a bit of bother when it comes to regional restrictions on content. You can bypass this with individual VPNs, of course, but Hyperbeam makes things easier for you by providing a Proxy option that allows you to view whatever the host of the room is playing when that option is turned on.

Plus, I’ve used Hyperbeam to host all kinds of watch parties, from watching online concerts together to even websites like Netflix that black out content when they detect screen recording or sharing, and it’s always worked well.

They have a Discord server where they take feedback and suggestions and keep users abreast of all the updates. They also host weekly giveaways for subscriptions, which is pretty cool!

Yup, there’s no chat back-up ????, which is sad because just a refresh is enough to say goodbye to all your previous messages. Noooo! It’s not too much of a bother because I compulsively take screenshots of good moments like the Gen Z I am. Still, I’d have liked to have the option to retain older messages in the same room, especially when binge-watching a series over a few weeks.

There’s no picture-in-picture support for iOS, which is really inconvenient because who ever uses their phone for long stretches of time without switching apps? And if you do, your playback pauses until you switch back to the app. The iPad and iOS apps, in general, are just enough to get the job done — but only when you’re not the host. However, they’re good for those only joining a room and watching alongside.

If there’s one feature that I really wish Hyperbeam had, it’s the ability for the host to have more control over who can see the screen and when. I usually only have watch parties with people I trust and know in real life, so it hasn’t been too much of a problem yet. But I’ve certainly had times when I’d had to input personal data to access my accounts and felt uncomfortable doing it while everyone was watching.

If you’re the same, you can work around this by inviting people after you’ve already logged in where you need to. You can also use browser extensions to black out your screen until they add the feature themselves

Overall, I’d say Hyperbeam’s been my favourite amongst all the similar apps I’ve tried to watch shows and movies together over long distances. And I’ve tried lots, from Caracal to Teleparty to Rave and more. I’d say it’s pretty worth a try if you’ve been looking for a way to get together with your friends, family, or partner online!

But wait, don’t click off yet — we have something for you!

Want to immediately try everything they have to offer, including premium features? You’re in luck because the incredible people at Hyperbeam agreed to a special giveaway just for Applesutra readers.

Claim your free 30-day premium subscription here. And don’t forget to let us know how you like it when you do!