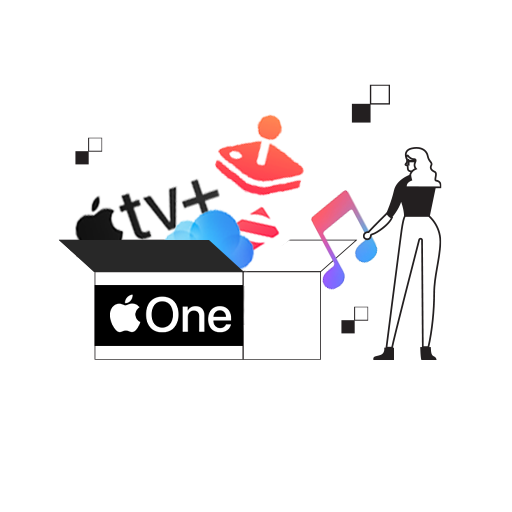 Apple Music, TV+, Arcade, and iCloud All Under ‘ONE’ Roof!

Yesterday we were introduced to Apple’s bundled subscription plan Apple One, under which users will be able to collectively subscribe to services like Apple Music, Apple TV+, Apple Arcade, and iCloud.

What exactly is Apple One?

Currently, Apple’s music and video streaming services, iCloud, and their gaming subscription, all have separate monthly subscription plans. Apple One is an attempt to integrate all these services under one banner and make it easier for their customers to subscribe to them in one go.

Initially, this package subscription came to light as a ‘bundled offer’ in iOS 13.5.5 Beta. And since then, everyone has been waiting in anticipation for the release date of this plan.

What are the plans & their India prices?

Plans start at ₹195 per month for an ‘individual’, which allows one person access to Apple Music, Apple TV+, Apple Arcade, and 50GB of iCloud.

Family sharing starts at a price of ₹365 per month, which includes all the entertainment and gaming services, but adds 200GB of iCloud storage that can be shared with members in your list.

With Apple ONE, you will be able to access all of Apple’s Music and TV+ content along with games under the ‘Arcade’ banner and iCloud backup and sync features. One can also access content across all Apple devices that are logged in with the same Apple ID.

Here’s the summary of the plans & prices:

With Apple One, you end up saving ₹177/- per month on individual plans and ₹201/- per month on the family pack, if you compared it to subscribing to Music, TV+, Arcade, and iCloud separately. Apple will also allow you to add more iCloud storage options to individual and family plans if you need an upgrade, but that would be at an added cost, of course.

Apple One was one of the highlights from yesterday’s event, but it got a ‘blink and a miss’ introduction. An all-in-one subscription plan will further strengthen Apple’s popularity and add convenience for its users who are already subscribed to various services.