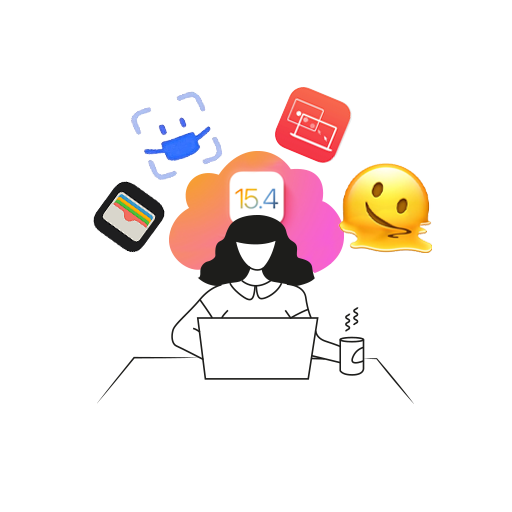 It’s here! It’s finally here! There’s a lot to celebrate in the latest iOS 15.4 beta update, but let’s start with how we can finally unlock our iPhones with a mask on without having to depend on our Apple Watch. Okay, it’s only here for those of us testing the iOS beta, but those without have something to look forward to with the upcoming update. Besides Face ID with Mask, iOS 15.4 also brings Universal Control, wonderful new emojis, and more. Check out the full list below.

If you’re wondering what it is, it’s basically a feature that lets you use your mac trackpad with other Apple devices like iPad and iMac when within 10 metres of each other, facilitating easy multitasking between devices. To use this feature, you must be running the current macOS Monterey 12.3 and iPadOS 15.4 beta versions on compatible devices.

Besides Universal Control, iOS 15.4 brings one feature I’m more excited about this one feature than any other. Yes, we will finally be able to unlock our iPhones without having to take off our masks, use our Apple Watch, or input the passcode – all incredibly inconvenient options.

With iOS 15.4 beta, Apple has enabled a feature that pays more attention to your eye area to recognise you. When you first turn on your iPhone after updating to iOS 15.4, it’ll show you a prompt asking to set up Face ID with a Mask. The message reads:

Face ID is most accurate when it’s set up for full-face recognition only. To use Face ID while wearing a mask, iPhone can recognise the unique features around the eye area to authenticate.

Using Face ID while wearing a mask works best when it’s set up to recognise each pair of glasses you wear regularly. Face ID with a mask doesn’t support sunglasses.

New Emojis! Thirty-Seven of Them!

Emoji lovers, it’s time to get excited, as we have 37 new emojis and 2 emoji updates to play around with coming in iOS 15.4. From new skin colour variations (representation, yay!) to a fresh way to express how my battery is always low, the new emojis are pretty damn cool. Here’s a list of the new emojis:

Can’t believe it took so long to get here, but with iOS 15.4, we can finally add accompanying notes to our iCloud Keychain passwords. No more guesswork over usernames, email addresses, and multiple accounts that didn’t save properly and you forgot about them. Hurray!

Apple’s also added “passkey technology preview” support, which will enable “signing in to passkey-compatible websites and apps on Mac and iPad using an iPhone with a saved passkey.”

Besides these, Apple’s added a few more features, including:

So here was a lowdown on everything iOS 15.4 brings for those brave enough for the beta, from universal control and new emojis to other smaller but essential updates. With all these new features, we’re expecting a longer beta run for this one. Which ones are you most looking forward to? Or have you already downloaded the beta? Let us know in the comments!