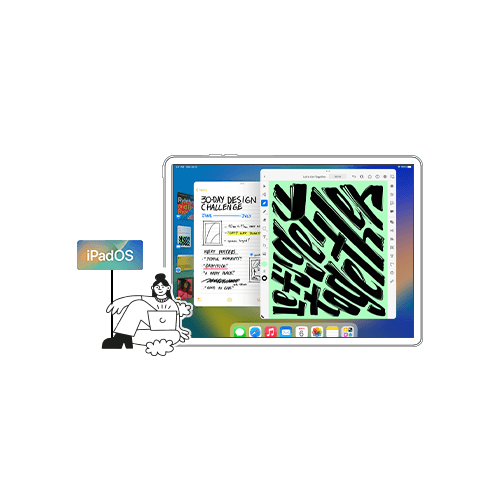 iPadOS 16 Promises to Make the iPad Experience Better Than Ever

Last night’s WWDC 2022 keynote introduced us to a bundle of cool new iPadOS 16 features that will make our lives (and work) easier. Apple is bringing desktop-class multitasking to iPad (finally!). The much-awaited weather app will make its iPad debut along with a range of new collaborative tools, improved gaming performance, and load of other features in iPadOS 16, which release in a couple of months.

I have gathered everything new in iPadOS from the WWDC 2022 keynote. And there’s a lot, I tell you. You might want to free yourself from other things before going through this one. Sit tight, folks; here we go!

First Up, Set the Stage for Stage Manager

It’s been a year since Apple revamped the split-screen interface. While it sounded pretty interesting initially, using two apps simultaneously on an iPad has continued to be a pain. Luckily, the new iPadOS 16 promises to give us a new (much like the MacOS) laptop-level multitasking layout called Stage Manager. It’ll allow you to:

Oh! Another thing that you should know about is the improved external display support perks that come with iPadOS 16. As soon as you connect your iPad to an external display, a filled-in high-resolution wallpaper will be there to welcome you. That’s the warm start, I think.

But it’s not just the display that’s gonna be connected. You can move your cursor to the order screen. All the multitasking functions available on iPadOS will now transition to your external display, meaning you can drag and drop files and apps from one screen to another, create groups of windows, overlapping windows, and quickly switch between apps. The only catch is that you will have to switch to an M1 processor iPad to enjoy this feature.

Another aspect of iPadOS 16 that received a lot of focus in this year’s WWDC is bringing the ease of sharing and collaborating with other Apple devices. Apple introduced their very own digital whiteboard (if they don’t mind me calling it that!) for real-time collaboration. The app makes conducting brainstorming sessions super simple. Members in a freeform can –

Keynote speaker Elizabeth Reid showed a sneak peek at how Freeform would be. Odds on, Apple will release freeform for iOS 16, iPadOS 16 and macOS Ventura in the coming fall. The iPad version will, of course, have Apple Pencil support. But what I would love to see is how different it will be from Microsoft’s whiteboard other than the integrations with other Apple apps.

Message Is Getting Smarter by the Day

I will start with a personal messaging experience. The ability to edit a sent message or unsend one was long overdue. So, now that the update is here – me likey! Marking a message unread is an additional perk. Apple is also bringing SharePlay to Messages and thus to your iPad. Message isn’t left out when it comes to multitasking and collaboration either. Here’s what you get with the new, improved Messages App:

Alrighty, I am going to say it — Apple’s gaming game hasn’t been great so far but it looks like the tech giant is upscaling (literally!). Tim Cook and team seem to have had a sincere effort to enhance the gaming’ experience with iPadOS 16. Here’s what Apple has in store:

WWDC 2022 also gave us the first look at Metal 3 (available on iPad with A13 Bionic and later processors) and MetalFX Upscaling. With the power of the M1 chip supporting the app, game developers will also have the scope to play around with their ideas and execution, given that image reconstruction and rendering of complex visuals will be faster with the highly responsive app.

At last, twelve years later, I can stop wondering if an iPad will ever have an in-built weather app. I mean, there was a weather widget, but somehow the iPad operating system never got the stock weather app. But, hey, better late than never, right? I guess they wanted to beautify the experience – although I doubt if the iPad version would be drastically different from what we have already seen on iPhone. Anyhoo, coming back to the weather app on iPadOS. You get –

Listen, I told you right in the beginning that we will see a lot of updates on iPadOS 16. If you didn’t believe me then, maybe now you will. The new software update also has all of these new tricks up its sleeve:

Turns out (surprise, surprise), not every iPad will be able to access all of the iPadOS 16 features. Here are the lucky models that’ll be getting the iPadOS 16 support:

According to Apple, iPadOS 16 will take iPad’s versatility to newer heights. Well, I don’t see why not! Although it may seem like iPadOS 16 is a rendition of iOS 16, borrowing elements from macOS, we trust Apple to optimise every app for iPads. And with the M1 chip, the user experience will certainly be compelling. After all, we would love to carry along an iPad that has all the features that a computer can offer — be it undoing/redoing, finding and replacing files, changing file extensions, or viewing folder size. Yup, Apple’s going to cover all those little things too. Come July. You see what I mean when you get to test the public beta yourselves.