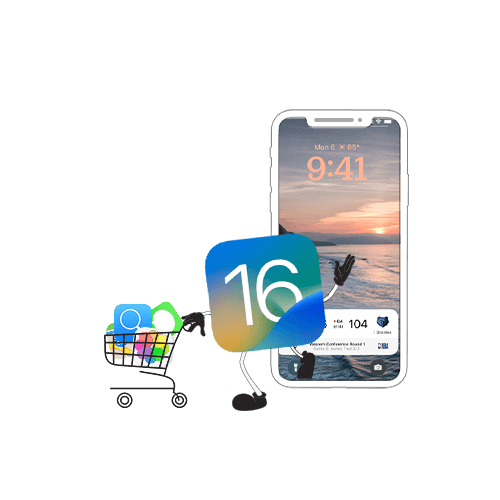 The wait is over! WWDC22 has finally begun, and it came swinging right off the bat. Apple’s yearly event started on June 6th with a keynote that announced some major updates. The main attraction? The long-awaited iOS 16 and its bucket full of features. Apart from a look at the newest iOS, the keynote also unveiled the new M2 MacBook Air and 13-inch MacBook Pro, iPadOS 16, macOS Ventura, and watchOS 9. Sadly, there was no new update for tvOS users.

A Unique Look to Lockscreens

Apple has taken personalization a step further by overhauling the lockscreen in iOS 16. A customisable clock that gives a 3D feel to your lockscreen wallpaper is just the tip of the iceberg.

From different gradients for your wallpaper to quickly switching between other lockscreen presets, we’re finally getting the personalisation features to make our devices unique to us. Not feeling a static wallpaper? No worries! Choose from a big library of dynamic, classic, and landscape wallpapers created especially for iOS 16. The collections include an astronomy-themed wallpaper with views of the Earth, moon, and the solar system, and a live weather theme. We can also (finally!) add widgets to our lockscreen, making it more useful and personal.

The update makes the lock screen compatible with a new Live Activities feature that tracks things like your food order or Uber ride and even provides live sports updates. It also brings an update to Focus, allowing users to choose different lockscreens for different Focus modes.

Apple has also updated how notifications look on the lockscreen, popping up on the bottom in a way that doesn’t cloud your screen anymore. All in all, a good update, we think!

Speaking of Focus modes, iOS 16 will let you separate work from life by helping you easily set up your Focus filters and implement them throughout your iPhone. Yes, this means you can personalise your lockscreen and your in-app experiences according to your Focus mode. Apps like Calendar, Mail, Messages, and Safari will display only the content relevant to the activated Focus mode.

Honestly, we can’t wait to see how third-party developers will integrate Focus modes into their apps. Should be interesting!

With iOS 16, users will be able to share photos easily using a separate library in their Photos app, synced through iCloud. Targeted mainly toward keeping all memories and photos involving multiple people in one place, these shared libraries can be accessed by up to six members at a time.

You can choose to share photos automatically using a toggle in the Camera app, and share your whole gallery or select based on a start date or the people in the picture. All members have permission to add, edit, delete or favourite photos in the library, which will appear in the Memories and Featured photos. Now photos scattered among different family members can find one place so everyone can experience special moments again.

Accidentally sent a text you didn’t mean to? Caught a typo right after you hit send? Well, iOS 16 will finally bring us the life-saving features users have been asking Apple for years.

The new iOS update will let you edit iMessage texts that you’ve already sent, and also bring the ability to undo a sent message. If you texted the wrong person or sent something you didn’t mean to, you can recall the message like it never happened. (The most useful upgrade, in my opinion!)

We all know what the top priority is. Safety. With the Safety Check feature of iOS 16, people in toxic relationships and victims of domestic abuse can restrict access to their devices for their partner. By resetting the privacy permissions, you can view and prevent anyone who had prior access from tracking your location, accessing FaceTime, reading your messages, and more. This new update will reduce one risk many people face when trying to seek help in dangerous situations.

Wouldn’t you love to pause a video and just copy the text in that frame? Well, now you can, with Live Text expanding to videos and the Translate app. No more taking screenshots for using Live Text, yay!

Live Text uses on-device intelligence to read the text on the screen and gives you the ability to interact with it. And it’s not only restricted to videos. Any text on your screen can now be copied and translated. The feature even lets you convert any currency in an image or video in real-time. It’s especially beneficial for coders looking to copy codes from tutorials and avid travellers unfamiliar with foreign languages.

Visual Lookup takes it a step further. Not only does it recognize the subject, like if it is a dog, a bird, or a statue, but it also allows you to crop or rotoscope a subject in an image and use it in apps like Messages.

This might not be very relevant to Indian users due to its limited functionality, but the Maps app has also seen some updates.

Apple Maps, in iOS 16, will let users plot multiple stops in your route. You can plan up to 15 stops at a time in your path, plan the course with your Mac, and sync it to your iPhone seamlessly. The update also lets you know the transit fare for your plan and makes payments easy by allowing you to add your transit cards to your Wallet. This way, you can track your balance and charge the card without leaving the Maps app.

Another update that doesn’t benefit Indian users much is coming to the Wallet app. Users in eligible regions will soon get the ability to Pay Later. With this new feature, you can check out with Apple Pay and get the option to pay the price later in four equal instalments over six weeks. What’s more? There is no interest on the instalments! You can track pending payments and their due date too.

You can now securely share your ID information for purchases requiring identity and age verification with the Wallet app. The data will only be sent after authorisation with either Face ID or Touch ID.

Key sharing also got an update. With iOS 16, you’ll be able to share keys with other users through apps like Messages, Mail and WhatsApp. The receiver can then add the key to their Wallet for easy access. Sweet, isn’t it?

With the major updates out of the way, let’s look at other improvements and features coming with .

iOS 16 brings changes to the Health and Fitness apps. Like we had heard in rumours, the Health app brings the ability to add your medication requirements to your devices and track them. Your device will even give you reminders when it’s time to take your medicine!

You can also invite others and share your medical data with the people you trust. And with the fitness app tracking your fitness milestones, iOS 16 brings an overall healthy update.

Family Sharing also got a boost. Parents can set parental controls right from the start with age-appropriate media suggestions. You can also accept or decline screen time requests through the Message app.

And these were just some of the highlights! There are many more updates and features coming in iOS 16. You can read all about them here.

But Is Your iPhone Compatible?

Now that’s the million dollar question, isn’t it? Previously, we had ruled iPhone 6 and SE out of the compatibility list for iOS 16. The rumours weren’t off the mark, but there are some additions. Apple has also dropped support for iPhone 7 and 7 Plus with iOS 16. The new update will be compatible with iPhone 8 and newer devices and iPhone SE (2nd generation or newer).

As for release dates, the developers got their beta version on the same day as the keynote. We normal folk will have to wait a tad bit longer with the public beta, which will release in July. As usual, the actual update will reach iPhones in September, alongside the launch of iPhone 14. Anyway, with or without an iPhone 14 in hand, we can’t wait to try out iOS 16 already. Are you excited? Tell us your favourite iOS 16 features in the comments!