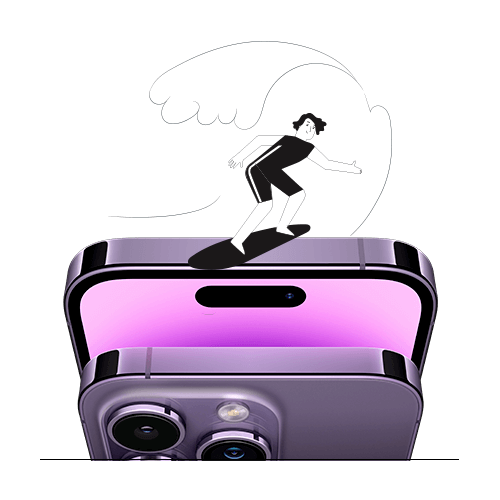 iPhone 14 Pro: The Most Apple-Like iPhone In Ages

Steve Jobs introduced the OG iPhone as three devices rolled into one – an iPod with touch controls, a mobile phone, and an Internet communications tool. While all these descriptions were valid, what truly made iPhone a revolutionary product was its uniqueness. With no physical keyboard, it looked and worked like no other mobile phone on the market.

15 years and almost 20 iterations later, iPhone is still the market leader. However, one no longer calls it a standout device. Modern iPhones look too similar to other premium smartphones and, despite the iOS advantage, they work pretty much on the same UI/UX principles.

iPhones do everything better, but they don’t do it differently anymore. At least, that’s what I believed until yesterday.

When Apple introduced the iPhone 14 Pro at the Far Out event last night, I was caught off guard in spite of the year-long leaks that had all but confirmed most of its features. It wasn’t the specifications; it was the innovation that brought back the ‘Bloody hell, how did they think of that!’ feeling. The good old Apple had shown up.

I can go on to list all the features of the iPhone 14 Pro and draw comparisons with iPhone 14 to highlight just how big a tech advantage it has over every other smartphone, including its latest sibling. But that won’t capture the essence of this new handset. Instead, as an ode to Steve Job, I am going to pick 3 things that make this iPhone truly unique and the most apple-like product in ages.

Apart from its absurd name, Dynamic Island is the most exciting feature of the iPhone 14 Pro. I also believe it’s the most innovative addition to an iPhone since the Touch ID.

What Dynamic Island does is it takes the most controversial (read: hated) feature of the iPhone series – that ugly Notch – and turns it into an amazing user experience. The ‘dead space’ of the front camera setup is now a ‘playful’ area that adapts to each app and displays content in multiple sizes and animations.

It’s almost a testimony to the seamless hardware & software integration that only Apple can deliver because they control both these attributes in-house. Seeing Dynamic Notch in action makes it difficult to decipher where the hardware boundaries end and where the software takes over.

The OG iPhone was dubbed a revolutionary Internet communications tool because it took something that caused frustration to many and turned it into a joyous experience. Dynamic Island does the same.

This isn’t really a new feature. Apple Watches have had the Always On Display since Series 5. However, that’s precisely the reason I am excited to see it come to the iPhone.

Every Apple Watch user that I’ve spoken to has said the same thing – Always On Display makes a huge difference and changes the user experience completely. The ability to glance at the notifications without having to pick up your iPhones is going to be even better.

Just like the ‘iPod with touch controls’ on OG iPhone, Apple is taking something that’s a proven success and bringing it to its flagship device.

This was expected. iPhones get a camera boost every year, especially the Pro models. Yet, the magnitude of improvements that Apple has made with the iPhone 14 Pro series is worth applauding.

Till last year, the 12MP rear camera setup on iPhones was good enough to take on the 48MP and even 128MP cameras on competing Android devices. Now iPhone has a 48MP setup, so one can only imagine how the benchmarks will change.

Action Mode, 4K Cinematic Mode, 2X better low light photography, and all the other specs that Apple shared in addition to the megapixel bump made the camera upgrade sound more & more ridiculous, but in a good way, of course!

That’s what the OG iPhone did as well. It was expected to be a good mobile phone but it still amazed us by being so good at it.

In the end, I’d like to quote a line from one of my favourite Apple Keynote moments. It was WWDC 2013, and Phil Schiller had just finished mesmerizing the audiences with Mac Pro’s unreal specs. He decided to conclude by talking directly to the sceptics who had been accusing Apple of making similar computers every year and said, ‘Can’t innovate anymore? My ass!’

Yes, sir, you can innovate. And how! I concede.

Apple Event Roundup: All The New Products & Their India Prices

AirPods Pro 2: Better Than It Sounds