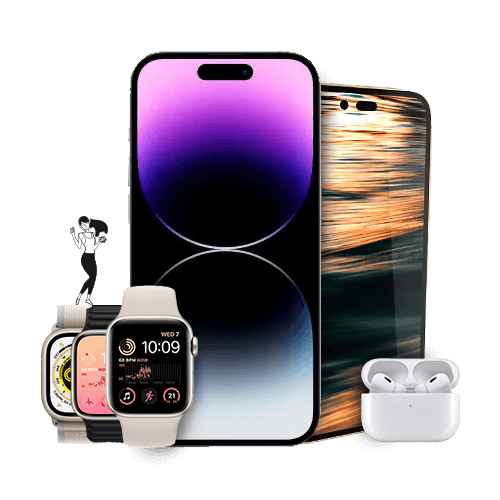 Apple Far Out Event Roundup: All The New Products & Their India Prices

The Far Out event is, well … out. And Apple has made all the stops and more! A new iPhone version, a next-gen upgrade for the Airpods Pro, and new Apple watch variants. Is it Christmas already?

The event was an hour and a half long, so we know many of you may not have followed it through to the end. Don’t worry. We got you!

The anticipated iPhone 14 Pro variant takes the phrase “the bigger, the better” to heart, with a big screen standing at 6.1″ (and even bigger with the Max version). But the 48mp camera with 4x resolution and advanced quad-pixel sensor definitely take the cake. As they said in the event, simply jaw-dropping!

To take multitasking further, iPhone 14 Pro features something called ‘Dynamic Island’. It’s basically a glorified notification bar. But what’s special about it is that it hides away after alerting you of a call or message, so you have more room to play with on the big screen.

How much will you have to cough up for this dynamically dazzlingly desirable model? The Pro version hits for Rs 129,900 and the Pro Max for Rs 139,900. Both will be available from September 16.

Read: iPhone 14 Pro – The Most Apple-Like iPhone In Ages

The less costly versions of the 14 series, the iPhone 14 and iPhone 14 Plus are loaded with enough battery power to get through an entire day. It goes even further, with iPhone 14 plus fashioning the best battery life of all Apple devices. So you can watch your favourite videos for hours on the Super Retina XDR display. Yeah, the new versions come with a high-quality screen too.

Along with these, the iOS 16 system brings other coveted features, like health app improvements and Crash detection. Want to know more? Read the article below.

Taking your audio experience to a new level, Apple introduces the 2nd generation of the AirPods Pro. Packed with the revolutionary H2 chip, the AirPods Pro boasts a 2x active noise cancelling, adaptive transparency mode, 6-hour battery life, and precision finding system, all of which are tied together by a powerful processor.

AirPods Pro stand at Rs 26,900, hitting the shelves on September 23. But before you order, here’s a fancy tip for you. You can customize the case of AirPods Pro 2 with your memoji. So, time to update your memoji, fellas!

Next up, the Apple Watch Series 8 and Apple Watch SE. The new series comes with extreme resistance to natural elements like dust and water and is also crack resistant. So if you want to go for a swim, trek up a hill, or just run for a bit, take your watch with you. It can handle it. If you get in an accident while out, the watch’s crash detection feature calls emergency services for your help. Neat, huh?

Let’s talk about health features now. With multiple trackers collecting metrics of every activity, be it cycling, running, or dancing, you can measure every step, every beat. It doesn’t end with activity tracking, though. With its innovative temperature check, you can analyze the changes to your cycle while you sleep, helping you plan your day accordingly.

One of the biggest reveals in the Far Out event is the Apple watch Ultra, which is said to be “the most rugged and capable Apple Watch ever.” The specs do back up the claim, but only testing will tell the truth.

The watch sports a titanium case, which sounds pretty strong. And with its IP6X dust resistance, the “rugged” part seems covered. But what about “capable”? Well, the Rs 89,900 watch uses a Wayfinder watch face to give the user enhanced navigation capability. And what’s cool is that you can transition to night mode in low-light scenarios with a flick of the switch.

The watch will be available from September 23. Got quite a way to go before you get your hands on them.

With the Far Out event now live, what’s next? Well, there is the October event to look forward to and enjoy the latest gadgets we talked about. So, as we journey into the Macbook hype, let us know what you think about the new stuff Apple just released in the comments below.