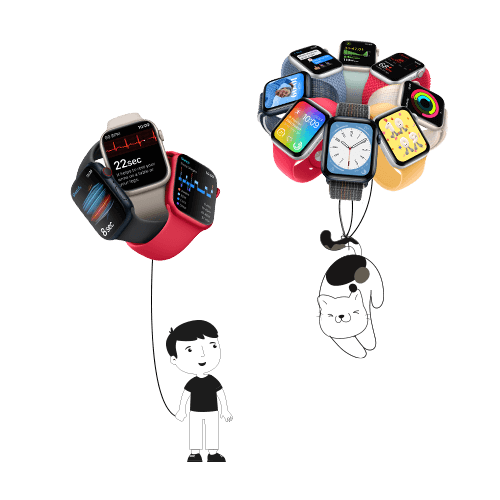 How do I start with this one? The Apple Watch Series 8 and Apple Watch SE 2 were unveiled during the Apple Far Out event. And two words come to mind to describe it – “utter disappointment”. There wasn’t enough in these products to excite me, and there’s barely enough in them to warrant such hype.

The keynote was more about Apple Watches in general than the products themselves. I felt it was just a desperate attempt to make these new releases sound grand and amazing, but they’re not; they’re really not. I honestly do not have much to write about because there’s practically nothing to write about. But let’s see if can’t muster something up for all of you.

If you ask me why you should upgrade from Apple Watch Series 7 to Apple Watch Series 8, I would say, “DON’T!”. Let this one slip through the cracks, especially if you aren’t a woman. I will get to that later. But first, here are all the features that Apple has retained. On second thoughts, don’t bother. Let’s just say that all that you have on your Apple Watch Series 7 plus a feature or two that might not be useful for us Indian folks at all!

As for the Apple Watch Series SE 2, I can’t quite tell the difference either, other than, I dare say, a few superficial upgrades borrowed from other Apple Watch Series. The struggle here is real, folks. Very, very real.

Apple upgraded the processor to S8 SiP for both watches. You know what that means – better performance, higher speed, the usual. Other than that, there are two, maybe three, notable upgrades to the Apple Watch Series 8, other than the processor, that I find worth mentioning. And let me warn you, they might not even be useful to all of us. So, let’s see – there’s the temperature sensor with an ovulation tracker, crash detection, and… crawling to the list, low power mode.

First off, no uterus, no Apple Watch Series 8. So, gentlemen, you can skip this unless you are family planning. I mean, it’s nice of Apple to upgrade the cycle tracking feature and consider integrating ovulation estimates. Fellow women, the “innovative” sensor will track our body temperature while we are asleep. It’s like a Doctor Sleep alert, if you get the reference! Anyway, the information collected, combined with our heart rates and logged cycle data, gives us an estimate of when we might be ovulating.

There is one feature of some interest, but I sincerely hope you never have cause to use it – the crash detection feature. It has the potential to save lives. In case there’s an accident, the watch will connect to emergency services as long as the watch itself or your iPhone is in a cellular network coverage area or connected to the internet for Wi-Fi calling. As I said, there’s a feature you’d never want to use!

Finally – low power mode. If the rescue services take hours to reach, worry not! With low power enabled, the Apple Watch Series 8 will run extra time of up to 36 hours. No, but on a serious note, the wearable still has a 309maH battery that will likely give 18 hours of all-day battery life. Low power mode doubles that usage time. I appreciate that.

Although it’s quite a forgettable addition to the Apple Watch lineup, the new version of the Apple Watch SE 2 comes with the same S8 SiP used in Apple Watch Series 8 – which means its performance speed is 20% better than its predecessor. And if you compare it with the 2020 Apple Watch SE, it’s actually much better. It’s got a heart rate monitor, cycle tracker, fall detector, emergency SOS, and a water-resistant rating of 50 meters. The features, barely exciting in themselves, are sure an upgrade from Apple Watch SE. Although, there’s one good thing to the table. The price – starts at ₹29900.00, whereas Apple Watch Series 8 starts at ₹45900.00

And that, my friends, is how Apple watches set a new standard (each year) to what smartwatches should be” (sense the sarcasm? Good. It’s intentional). That’s all from me. What did you think about these new Apple watches released in this year’s Far Out Event? Let us know in the comments.

Apple Event Roundup: All The New Products & Their India Prices

iPhone 14 Pro: The Most Apple-Like iPhone In Ages

AirPods Pro 2: Better Than It Sounds