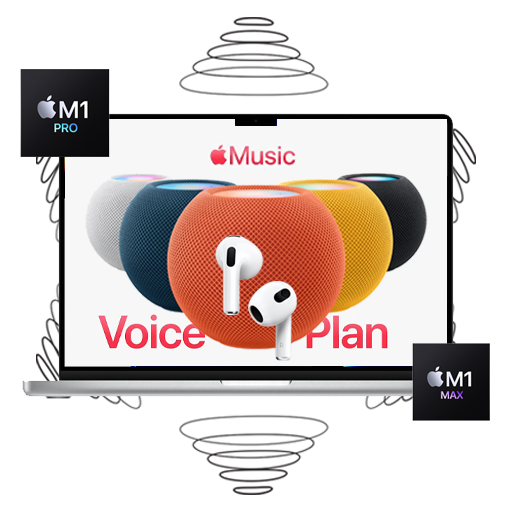 Here’s What Apple Unleashed: From AirPods 3 to New MacBook Pros

We’re back with more Apple event updates for you! Last night, a rather short event gave us a glimpse of Apple’s newest products. The event witnessed the launch of the AirPods 3, a new Voice Plan for Apple Music, colourful HomePod mini devices, and the powerhouse MacBook Pro models. Alongside its devices, Apple also introduced two more powerful versions of the M1 chip called M1 Pro and M1 Max. (The naming sounds familiar, doesn’t it?)

The new Apple Silicons are capable of 13 times faster graphics, 1.7 times more performance, and just everything times everything apparently. I don’t think I’ve heard the phrase ‘x times faster than x’ so many times consecutively than I did last night. Nevertheless, Apple’s event name remains true to its next-generation processors. They truly unleash a lot of power — at a cost. More on that later. Let’s get straight to everything Apple announced at its Unleashed event.

If you were watching the Apple event with us and following our updates last night, you’ll already know about this new, kind of perplexing Apple Music plan Apple announced. Apple has introduced a new entry-level subscription plan for Apple Music called the Voice Plan. It costs ₹49 per month, and users can enjoy the entire Apple Music library on their Apple devices. This plan is entirely powered by Siri voice search for searching music, playlists, artists, and albums. You can also ask Siri to play custom playlists according to your mood or occasion. The Apple Music Voice Plan can be bought individually, or you can access Siri voice search from any active or existing plan.

The third generation of the AirPods launched last night, priced at ₹18,500. As thought earlier, the new AirPods 3 pretty much resemble the AirPods Pro, just without Active Noise Cancellation, Transparency Mode, and the silicone ear tips.

Moreover, Apple has enabled Pro features like spatial audio, adaptive EQ, a shorter stem, and force sensor control rather than the uncomfortable tap gesture that came with earlier models. The new AirPods 3 come bundled with a wireless charging case, and the company claims a longer battery life of up to 6 hours of listening time. Apple’s new AirPods are also sweat and water-resistant.

The tech giant has introduced three new colours alongside the regular White and Space Grey shades. You can now buy the HomePods mini in a shade of Blue, Yellow, or Orange, starting November. The HomePod mini continues to cost ₹9,900.

Apple has gone all the way to give the next generation of the MacBook Pro devices a much-needed makeover. The latest Pro laptops pack in a lot of punch, especially with the introduction of the M1 Pro and M1 Max generation of processors. The Cupertino company has slimmed the bezels and introduced an all-new 14-inch model alongside the 16-inch variant without changing much of the form factor.

One of the highlighting features of the latest MacBook Pro models is the introduction of ProMotion display technology. The new models are capable of 120Hz refresh rate, have mini LED displays, and are capable of chunking out brilliant colours. Also, finally, Apple has given the 1080p treatment to the front cameras of the Pro laptops. However, the large notch at the top of the screen divides opinions. Personally? I think it’s an eyesore. Apple also finally brought back a couple of other things: the physical keys on the top of the keyboard instead of the controversial Touch Bar and the various ports, probably due to huge public criticism.

The new MacBook Pro devices start at ₹1,94,900 for the 14-inch model, and the 16-inch unit will set you back by ₹2,39,900. Talk about being pricey. However, you do get a lot of power at that price, so many “Pro” (read super-rich) users will probably get their hands on the new MacBook Pro models as soon as they can.

Anyways, that’s most of what Apple ‘Unleashed’ yesterday. A good in-depth article on all the latest Apple devices will be up soon! Stay tuned for more Apple event updates, keep in touch via the comments below, or drop us a message on our social media handles. We’re always happy to talk!