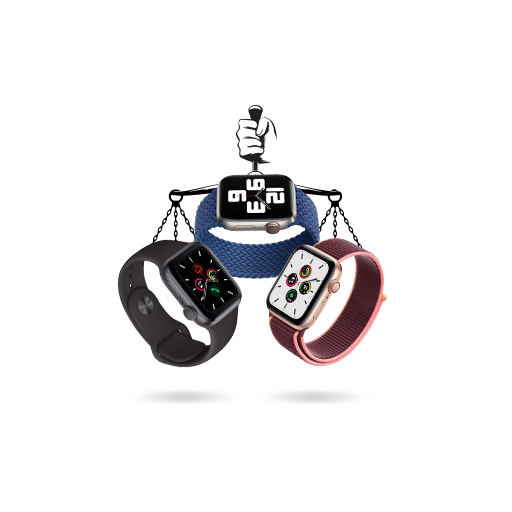 The “Time” in the “Time Flies” event stood for Watches, and as anticipated, Apple launched two new smartwatches on September 15th. A flagship Series 6 introduces new and added health monitoring features and Product RED into the Watch family. Welcome, welcome!

Another launch added the “SE” tag to Apple Watches, giving us a cheaper alternative to the S6 by having a similar looking chassis while leaving out some high-end features. This entry-level multi-functional Watch is available in two sizes and three color options.

Apple’s refreshed product lineup consists of a Series 5 replacement and a device that sits below it – the Apple Watch SE. Technically, the SE gets the latest design elements from the Series 6 and the processor from the Series 5. It also sees a few changes to the heart rate monitoring sensor that adds an accurate ECG reading and Blood Oxygen Levels. Besides color and case material options, there isn’t a major generation gap between Series 6 and Series 5. The following table of content will give you insights into all three models:

While the Series 6 does feature interesting hardware upgrades, Series 5 – though a generation old – still makes a strong case for itself. The SE has the best of both worlds. Apple has officially replaced the Series 5 with Series 6 in India, but there still might be a few units left in the store and with online retailers. You can also expect to get some discounts once Series 6 arrives in-stores. Here’s a detailed breakdown to help you make the right choice.

Apple launched the Series 5 with four case material options; Aluminium, Titanium, Stainless Steel and Ceramic. However, with the Series 6, the Ceramic material was ditched. Apple Watch SE is available in the Aluminium option.

Size variants on all three smartwatches remain the same with 40mm and 44mm options. The 40mm is more suitable for smaller wrists while the 44mm iteration has a larger screen that adds convenience to touch-inputs.

Both the Series 5 and 6 have Always-On OLED displays installed. The new generation model has a 2x brighter screen in outdoor conditions in the wrist-down position. The cheaper SE retains Apple’s “Raise-to-wake” gesture instead of a screen that’s on all the time.

In this regard, the SE uses a display technology last seen in the Series 4 watches. The higher variants have similar brightness and refresh rates. At a glance, Series 5 users won’t find much of a difference while interacting with the Series 6.

As for the battery life, Apple has always been a bit unclear about that. The Series 5 was a huge upgrade over the fourth generation. This was largely due to the inclusion of an always-on display needing more battery life and power-saving efficiencies.

According to the company, Apple Watch Series 6 has similar power capabilities. However, the SE may perform better in real-life conditions than the Series 5 and Series 6 due to the absence of the always-on display.

The sensor that’s installed at the back of the Watch is largely responsible for monitoring health data. The Series 5 uses a second-generation heart rate sensor capable of performing an ECG reading, monitoring pulse, and electrodes.

The budget-priced SE has the first generation optical sensor. It cannot perform an ECG but can monitor pulse rates and electrodes while tracking activities. This seems a bit outdated, and Apple’s cost-cutting is pretty evident here.

The biggest upgrade in the latest generation Watch Series is an inclusion of the top-notch sensor that can monitor Blood Oxygen levels, a feature that can very well be Apple’s USP in the current pandemic situation. Apart from this, the new sensor can perform more accurate and faster ECG readings and pulse rate monitoring.

All three models are installed with activity tracking and pedometer. You can also pair AirPods to the Watch and leave your iPhone at home while out for a run. The Watch App Store has a good selection of workout apps that can be downloaded on any of the models.

The Watch Series 6 starts at ₹40,900/- that’s the same price at which the S5 was launched a year ago. While Apple has officially discontinued the Series 5, there are still a few examples left in-stores and with online retailers.

Once, the latest generation models reach stores, and we expect discounts to be offered on the S5 variants, which could be a good proposition at a lesser price. You can get a good flagship smartwatch at a reasonable price.

The Apple Watch SE is the most value for money. It has a good processor, display size, and case material. It could turn out to be the highest selling smartwatch by Apple.

We have extensively used the Series 5, and it has turned out to be a great companion. The Always-on OLED screen is a boon, and one doesn’t have to flick the wrist to view notifications or time. The battery lasts a good one and a half days with average usage. Touch responses are crisp, and few Series 5 users won’t feel the need to upgrade to the Series 6.

The Series 6 hasn’t been tested for daily usages as yet, and it’s unclear how it’ll fare. On paper, the more powerful latest sibling is one of the best-specced flagship smartwatches. It takes the health monitoring functions on an Apple Watch a notch higher. It is a great option if you are a new entrant in the flagship wearable tech segment. Many Apple Watch users would want to upgrade their older generation devices to avail the added health monitoring features and those brilliant colour options.

On the other hand, the Apple Watch SE caters to a wider range of potential customers. It looks similar to the top-end product, spots a decent display with good resolutions, and a powerful processor. This device might as well be the best option for new Apple Watch buyers, also for people who want to upgrade their Series 2,3, or even 4 for a more modern looking device but don’t want to spend much.

All said and done. The Series 6 should be on your shopping cart if you are looking for a top of the line smartwatch experience with the latest health monitoring features. The predecessor Series 5 is for buyers who want the flagship experience at a lesser cost and don’t mind compromising next-generation heart rate sensors.

The Special Edition Watch is targeted at buyers in the entry-level segment with a flagship looking device. It has all the best elements Apple could throw in considering the price. It looks up-to-date. It may lack in the hardware department but makes up for being a high-end rivalling device.

No matter which device out of three you choose, Apple’s ecosystem brings the most convenient way to track your health and fitness. With the new colour options, it’ll be interesting to know our reader’s choice if you ever decide to get the latest smartwatches. Add your comments below.

PS: I am completely drooling over the Series 6’s Blue.