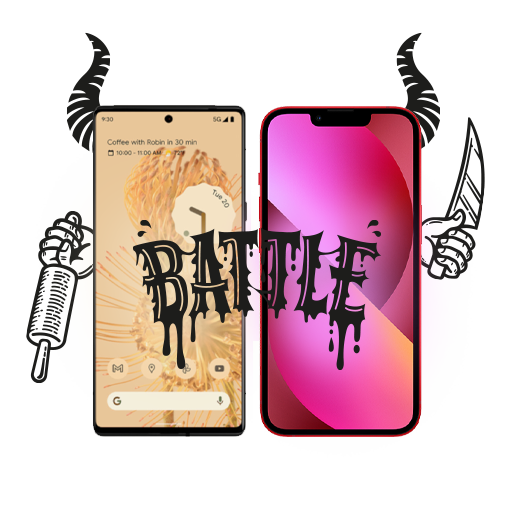 Battle of the Giants: Google Pixel 6 vs. Apple iPhone 13

Doesn’t that sound like Captain America vs. Ironman? When one of my favourite cinematic universes announced that their top superheroes were going up against each other, I was all confused about which side to pick. Both Cap and Ironman had their own merits, so it was understandably hard to decide who would overpower the other.

Enough of my Marvel ramblings. I am here to tell you about two superpowers in the world of technology, going up against one another for the crown of the best smartphone. On the one hand, we have the uber-cool iPhone 13 series, and on the other, Google’s latest Pixel 6 smartphone. Both are recent introductions but promise a lot of excitement. Google has upped its game by making an inherent processor, which Apple has done since its inception. So can Google Pixel 6 beat Apple iPhone 13 this time? Let’s find out.

The Google Pixel 6 hasn’t officially launched in India yet, with its release contained to just 9 countries, and it seems like the company isn’t planning to either. Meanwhile, Apple is well established already and thus, the Cupertino tech giant launched products in India more or less at the same time as the rest of the world. So, we won’t consider India prices for this comparison since the Pixel isn’t officially available.

Apart from the regular models, Google and Apple both have a Pro variant of their latest smartphones. The Pixel 6 Pro starts at $899, while the iPhone 13 Pro is priced at $999. Apple also offers a Pro Max variant that starts at $1,099. If the price is anything to go by, the Google Pixel has a clear advantage over Apple. Both tech giants offer higher storage options at added cost.

This is the first time Google is trying their hand at producing an SoC for a smartphone. Called Tensor, Google’s latest processor is going up against the likes of Apple’s A15 Bionic. However, it’s highly unlikely as the processor on the iPhone 13 series has outperformed every smartphone chipset. SoC’s are something Apple has always mastered, and seldom some other brands beat them in performance.

Though Apple’s iPhones have smaller RAMs and lower mAh batteries, their processors are extremely power efficient, and thus, RAM and mAh on iPhones aren’t a matter of concern (usually). Therefore, even though the Google Pixel 6 has 12GB of RAM and a 5000 mAh battery on the larger Pro variant, the iPhone 13 Pro Max outperforms it by giving users stronger lag-free performance and longer charging intervals.

If we talk numbers, the Google Pixel 6 Pro has a 50MP main, 12MP ultrawide, and 48MP telephoto lens. Meanwhile, Apple has installed three 12MP lenses. But don’t let the numbers fool you. The excellent cameras on the iPhone 13 Pro models don’t merely capture stunning pictures; they’ve helped in the medical field as well. Also, the iPhone has a larger aperture for capturing more light, and thus the Apple device enhances images and is a tad better than Google at night photography.

The non-Pro variants of Google and Apple spot dual rear cameras. While the Pixel has a 50MP and a 12MP setup, the Apple iPhone has dual 12MP lenses. While the Pixel may be more capable of capturing more detailed images, Apple’s larger aperture will aid in brighter photos. However, I will reserve comments on which tech giant has provided better cameras when we physically pit them against each other.

To open the Pandora’s box I was conveniently avoiding, the battle goes beyond hardware. Google Pixel 6 runs Android, and the iPhone has iOS. Now, everyone knows about my bias towards iOS. However, Android is more customisable, and the Pixel devices don’t have a ‘skin’ over them, unlike other Android derived user interfaces full of bloatware.

Alright, the new Android 12 looks slick, and the best part is that whichever wallpaper you put, the entire colour theme is applied over app icons, notification bar, and other buttons. Having a full-blown customisable operating system is something that Apple is lacking. Sure, we have the iOS 15 with widgets, notification summary, and focus mode, but Android does better at adapting a home screen as per users’ choice.

Nonetheless, if you’re not looking for a customisable operating system and a lower price point, the iPhone 13 and 13 Pro aces the Google Pixel in almost every other aspect. Which phone do you think is a better device? Let us know in the comments.